It's too soon to know how the "Brexit" will actually impact the global economy, but it's probably not a bad idea for investors to assess their exposure to the region. In that spirit, Bank of America (NYSE:BAC) investors may be in for a bit of surprise. B of A has a considerable amount of risk exposure to the U.K., much more than I would have ever expected.

Bank of America's outsized exposure to the U.K.

To understand how much exposure Bank of America has to the U.K. and other European economies at the epicenter of the Brexit, investors should turn to the bank's quarterly SEC filings. Tucked away deep in these reports, banks report their largest and most-significant "country exposures."

A country risk, which is the basis for a bank's country exposure, is the risk that a sovereign event or action could alter the value or terms of the bank's contracts in that country. This applies to loan contracts, derivatives, and securities, plus the impacts to counterparties and issuers. Put more simply, this data tells investors how much exposure the bank's operations have if things were to hit the fan in any given country. Like, for example, if the U.K. voted to leave the European Union.

As the chart below demonstrates, Bank of America's exposure is quite high in the United Kingdom -- considerably more than the investment bank Morgan Stanley (NYSE:MS), and greater than even JPMorgan Chase (NYSE:JPM). 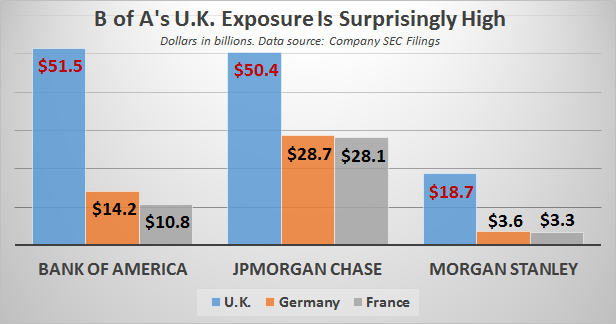 Beyond the sheer size of Bank of America's U.K. country exposure, it's shocking to me that its U.K. exposure is greater than JPMorgan's. JPMorgan has 11% more assets than B of A. Regulators place JPMorgan two "buckets" higher than Bank of America on the list of global systemically important financial institutions.

JPMorgan's combined exposure to France and Germany is 2.3 times greater than B of A. For the 12 months ending in February, JPMorgan's investment bank generated $1.1 billion more revenue than Bank of America Merrill Lynch, beating it by 24%.

Bank of America's exposure, as well as Morgan Stanley's and JPMorgan's, goes beyond the financial risk

In addition to the financial exposure to the Brexit, Bank of America also has operational challenges that must be addressed. As part of the regulatory framework of the EU, international banks in the U.S. typically operate subsidiaries in the U.K. specially designed to give them access to the broader eurozone markets. In this way, one subsidiary grants the bank access to the whole of the EU.

Bank of America is no different, using its U.K.-based broker-dealer subsidiary, Merrill Lynch International, as its ticket into the eurozone markets. With the U.K. now exiting the EU, that structure will likely have to change. To access the EU markets sans the U.K., these banks will probably have to set up new subsidiaries based in another EU financial center, while still maintaining London operations to serve their British clients. That will add costs, complexity, and more regulatory hurdles to overcome.

More than 1,300 British Bank of America employees, about 25% of the bank's workforce in that country, may have to be relocated, according to an estimate from investment bank Keefe, Bruyette & Woods. Morgan Stanley has reportedly started moving more than 2,000 jobs away from its London office already.

It's impossible to know how the Brexit vote will ultimately impact economies and geopolitics down the road. Investors should, however, take the time to understand the risks facing their investments in this region. For Bank of America investors, that exposure is likely more than you thought.