I recently discussed how eyewear maker Warby Parker, which was founded just six years ago, became a unicorn start-up with a valuation of $1.2 billion. The company designed its own frames, sold them for less than $100, and initially sold its glasses online to avoid brick-and-mortar markups. It shipped five frames to customers to try on at home for free, and let them upload selfies to "virtually" try on glasses. The company also donates a pair of glasses to non-profit organizations for every pair purchased. 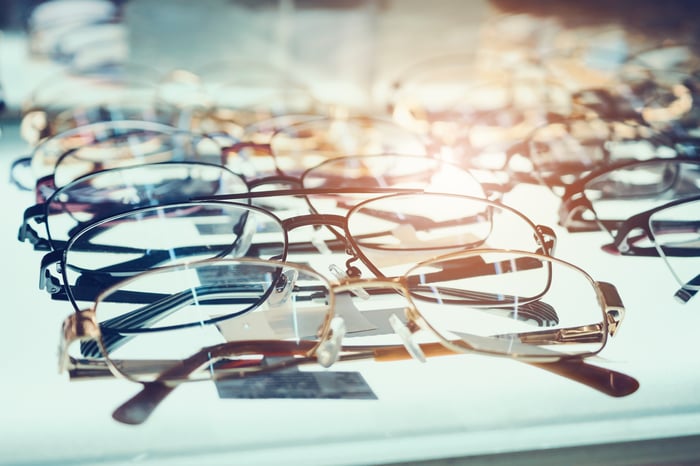 Warby Parker was dramatically different from eyewear giant Luxottica (OTC:LUXTY), which licenses big brands like Chanel and runs brick-and-mortar chains like LensCrafters. Warby's cheap and fashionable frames soon won the praise of Vogue, Elle, Esquire, and GQ -- which called the company the "Netflix of eyewear." That flattering coverage boosted Warby's profile, and it capitalized on that newfound fame by opening brick-and-mortar showrooms across the country. Between 2013 and 2015, Warby's annual revenue nearly tripled from $35 million to over $100 million.

That kind of growth has fueled speculation that the company might go public in the near future. But before we consider the possibilities of an IPO, we should recognize the company's main investors.

American Express participated in its Series B funding in early 2013. Its total investment is unknown, but the round raised $41.5 million and valued the company at about $250 million. American Express' initial investment in Warby Parker has certainly appreciated, though it's still only a drop in the bucket in the context of America Express' projected sales of $32 billion in 2016.

T. Rowe Price participated in the Series D round, which raised $100 million last year and boosted Warby's valuation to $1.2 billion. That investment hasn't appreciated as much as American Express', but it's notably one of five major Warby investors which also invested in Airbnb.

That doesn't mean that Warby will necessarily follow a similar growth trajectory as Airbnb, which is now valued at $25.5 billion, but it's still an encouraging vote of confidence. Four of Warby's investors also invested in Uber, which was worth $62.5 billion after its last round of funding.

Who are Warby Parker's partners?

Back in 2013, Warby partnered with Alphabet's Google to create more fashionable frames for Google Glass. That partnership flopped after Google discontinued the maligned device, but it helped Warby gain more media attention.

Last May, co-founder Neil Blumenthal told Inc that his company wasn't in a hurry to go public:

We believe that it's not intelligent to grow in the short-term at the expense of the long-term potential. For us it's all about wild, fast growth while maintaining awesome customer experiences.

That seems like a wise strategy for now, since Warby's $1.2 billion valuation values the company at 12 times its 2015 sales. By comparison, Luxottica has an EV/Sales ratio of just 2.5. Warby also isn't profitable, so investor pressure to cut costs and boost earnings could alter its business model and throttle its top-line growth.

Warby Parker probably won't go public anytime soon, but investors should be familiar with its main investors and partners. Luxottica investors should also keep an eye on this little eyewear maker, which could eventually disrupt its dominance of the eyewear market with a new business model.