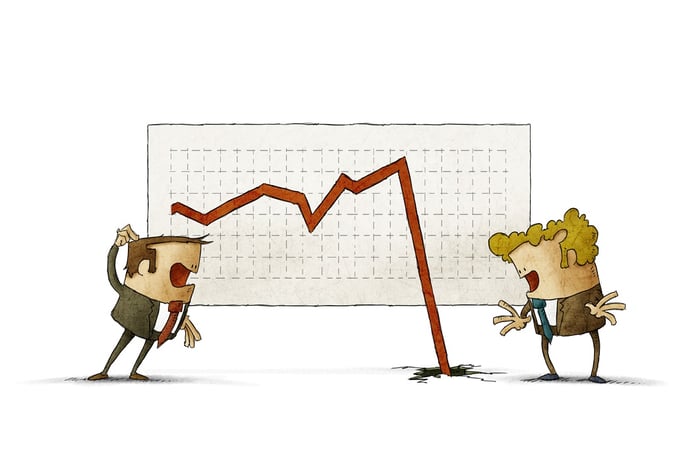 Publicly traded stock brokerages are getting banged up today. Charles Schwab (NYSE:SCHW) and E*Trade (NASDAQ:ETFC) are trading lower by 12%, while shares of TD Ameritrade (NASDAQ:AMTD) are down about 11% as of 3:20 p.m. ET.

Though increased trading activity as a result of Brexit-related volatility should help the brokerages over the short term, there are more important earnings drivers that have been negatively affected by Brexit -- primarily the prospect for higher interest rates and rising lending profits.

The leading retail brokerages are in many ways more bank-like than brokers. Note that in the first quarter of 2016, Charles Schwab generated net interest revenue of $772 million, substantially more than the $232 million it generated in trading revenue.

The brokers' reliance on interest income earned from banking products, and from interest charged on margin accounts, is the main concern today. The case for the retail brokerage stocks has been that rising interest rates would lead to rising profits. Notably, Interactive Brokers, which is less interest-rate-sensitive, didn't join the double-digit sell-off club today.

After Brexit, many market participants now expect that interest rates will stay lower for longer. Incredibly, traders are now pricing in a 10% chance that the Federal Reserve cuts rates in July, Bloomberg reported. It was only a few weeks ago that investors were talking up the possibility that the Fed might increase its benchmark rate in June, a move that never happened.

Rising interest rates would be universally good for the industry. TD Ameritrade prominently displayed a rate sensitivity analysis in a recent presentation, pointing out that a 1-percentage-point increase in rates would add $0.32 to $0.48 to annual earnings per share in the first year, amounting to nearly one-third of its actual fiscal 2015 diluted EPS of $1.49.

E*Trade generally shies away from giving guidance about rate sensitivity. Charles Schwab, however, details in its financial filings that a gradual 1-percentage-point increase in rates would result in an 8.7% increase in net interest income. The key word here is gradual, which downplays the long-term revenue and profit gains that would come year after year as a result of higher net interest margins.

All of this is to say that the major retail brokers are getting pummeled because the short-term boost from trading won't offset the long-term loss of higher interest income.