XPO Logistics might get run off the road in Europe in the near term, but the long-term scenario likely isn't changed much. Image Source: Getty Images.

What: Shares of logistics/trucking/shipping company XPO Logistics Inc (NYSE:XPO) are down 17.5% at 2:51 p.m. EDT on June 24, following the bombshell news that U.K. voters have chosen to leave the European Union. Markets around the world are roiling on the news, which is affecting pretty much any multinational company with exposure to Europe. Even diversified global-shipping giants UPS and FedEx are feeling the impact today: 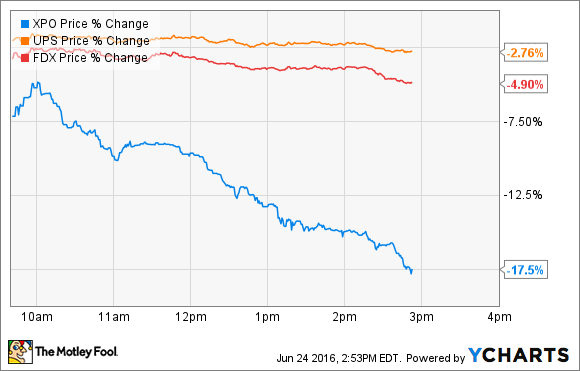 So what: XPO Logistics stock is getting especially hard hit today because of the company's significant exposure to Europe and the U.K. On last-quarter's conference call, CEO Bradley Jacobs said that Europe was about one-third of the company's business.

The company is also betting heavily on Europe being a big growth driver going forward. Chief Strategy Officer Scott Malat pointed to a 500-million euro pipeline, larger than the $400 million in North America, and growth in e-fulfillment, particularly in Western Europe, as strong growth drivers for the company.

Now what: Yes, XPO Logistics has relatively large exposure to Europe and the United Kingdom, and in the next couple of years -- that is to say the short term -- it's frankly unclear how the "Brexit" will impact the company. That's because it will probably take at least a year for the country to go through all the steps -- including negotiating separate trade agreements with all 27 other EU countries -- in order to exit the union, and possibly longer.

My best guess is that there will be some short-term impact depending on the hit to trade, in general; but in a lot of ways, it seems more likely to be a "zero sum game," as continental-based businesses shift operations out of Britain, and vice-versa.

At the same time, this could actually benefit XPO in the long run, because the company is a logistics expert. It's not unreasonable that many companies looking to move goods across EU countries and U.K. borders would look to a company like XPO to help them with the transition. Yes, it will cost money for XPO to adapt to this new environment, like every other company operating in this region; but it could also create an opportunity.

This probably doesn't really change things in the long run for the company, though it will likely add cost and complexity in some of its dealings. But those costs tend to get passed along to customers, so even that's not likely to significantly crimp the company's earnings power in the EU and U.K. down the road.