Jason Hall, Tyler Crowe, and Daniel Miller
(TMFVelvetHammer)
Author Bio
Born and raised in the Deep South of Georgia, Jason now calls Southern California home. A Fool since 2006, he began contributing to Fool.com in 2012. Trying to invest better? Like learning about companies with great (or really bad) stories? Jason can usually be found there, cutting through the noise and trying to get to the heart of the story. Follow @TMFVelvetHammer

Our experts are bullish on these three beaten-down stocks. Image source: Getty Images.

Sometimes the best stocks to buy are ones the market has recently beaten up, bloodied, and turned its back on. The hard part, of course, is knowing which of those stocks are down for good, and which are great businesses that are primed to recover, and then investing accordingly.

With that in mind, we asked three of our top contributors to tell us about a company that Mr. Market has beaten down recently but that looks ready to bounce back in a big way.

They offered up HollyFrontier Corp. (NYSE:HFC), General Motors Company (NYSE:GM), and PACCAR Inc. (NASDAQ:PCAR), all of which have seen their stocks fall substantially from their 12-month highs: 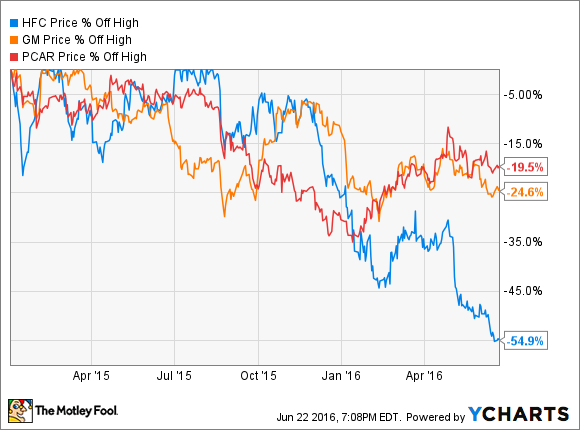 Keep reading to learn why our contributors say the stocks of these three companies are set to rebound.

HollyFrontier: A value play on an ultra-efficient refiner

Tyler Crowe: As the price of oil has slowly crept back into the $50-per-barrel range, refining stocks have been getting crushed. Those higher crude prices have caused average refining margins to decline precipitously for several quarters, sending shares of oil refiner HollyFrontier (NYSE:HFC) way down in 2016. 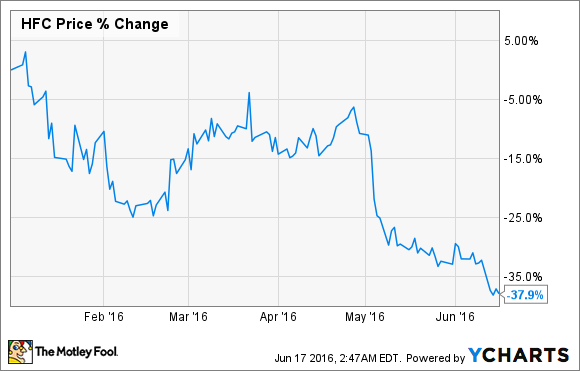 Sure, refining stocks will come and go with the price difference between crude oil and refined products. What sets refining companies apart, though, is their ability to run their facilities at high utilization rates and keep operational costs per barrel low. This is something HollyFrontier has excelled at, and management is spending on capital projects that should improve it even further in the coming years. In fact, it's management's ability to effectively allocate capital that has allowed the company to generate some of the best returns on capital employed in the refining business.

With shares trading at 1.7 times tangible book value -- its lowest in 15 years -- and a dividend yield of 5.33%, HollyFrontier looks incredibly cheap today. If management's recent history of generating returns for shareholders is any indication, then buying shares today should make for a decent investment.

Daniel Miller: If you're looking for beaten-down stocks, you can find more than a handful within the automotive industry -- but some of them could offer investors great value, despite a potential slowdown in U.S. new-vehicle sales. General Motors (NYSE:GM) is far from the company it was a decade ago, and it's well positioned to survive in the evolving auto industry.

"I absolutely think, and we think, we're undervalued right now," General Motors CEO Mary Barra said before GM's annual meeting, according to Automotive News. "We're going to continue to work to keep making sure people understand exactly the mission of General Motors and what we're working toward. I believe that as we continue to do that, that's something that will take care of itself."

General Motors has done an excellent job of improving its operations in the present, while focusing its strategy for the future of the evolving automotive industry.

In the wake of slashing its number of global vehicle platforms, cutting costs, and leveraging its scale with its suppliers, GM has improved its return on invested capital on a rolling four-quarter basis to 28.5% as of the first quarter. Also, GM has focused on reducing its sales to fleet channels, which has sent its total sales lower but has helped boost transaction prices, margins, and residual values on its vehicles.

While the improvement GM has made in its operations has been impressive, arguably even more impressive has been its quick reaction to a rapidly changing auto industry. GM has created Maven, a brand umbrella that will cover its ridesharing and mobility projects, invested in Lyft to develop ridesharing projects, and acquired Cruise automation to focus its efforts on autonomous driving. GM even showed off its Chevrolet Bolt electric vehicle, which will have a range of more than 200 miles for a price tag of roughly $30,000.

GM is extremely profitable and should remain so even during a downturn. It's more focused on adapting to an evolving auto industry than ever before, and it trades at a cheap 5.0 forward price-to-earnings ratio, according to Morningstar's estimates, with a dividend yield of 5.27%.

PACCAR: A stalwart trading for a nice discount

Jason Hall: Even after rebounding nearly 16% since the beginning of 2016, shares of heavy-duty-vehicle maker PACCAR are still about 20% below their 12-month high, and not without some justification. After all, heavy-duty-truck sales are expected to decline in North America this year after a very strong 2015, and North America is by far the company's biggest market.

Add in the impact of a nearly $1 billion charge last quarter -- related to a European Commission investigation of multiple truck makers and potential charges of price-fixing -- that led the company to report a net loss, and there's a reason Mr. Market has turned his back on the company. However, I think the beat-down is probably a bit overdone, and it's created an opportunity for investors to pick up shares at a pretty good price. 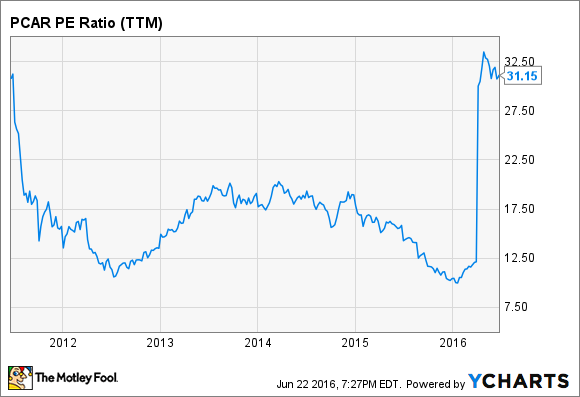 However, that factors last quarter's $943 million charge -- which is part of its GAAP financial results -- into the multiple. And of course it should, since the company has set that cash aside to deal with the likely fines it will end up paying to resolve this investigation. And that's a very material event. However, it gets in the way of evaluating the company's ability to make money going forward. 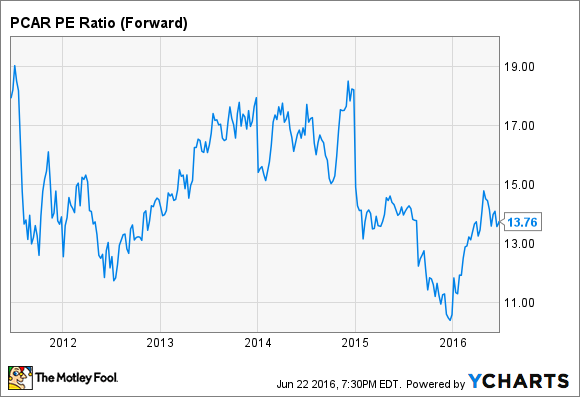 While PACCAR's stock isn't as dirt cheap as it was six months ago, it's still trading below its more historical forward P/E ratio.

I'm not saying you should just dismiss a potential billion-dollar fine out of hand. But I am saying that since it's not a recurring cost, and PACCAR has already recognized a sizable loss because of it, don't throw the baby out with the bathwater.

PACCAR is one of the best truck manufacturers in the world, with world-class operating efficiencies and strong market share. If you look beyond the GAAP results at the potential of its operations, PACCAR's shares look pretty cheap today and poised to bounce back in the coming years.