Steve Symington, Sean Williams, and George Budwell
(XMFSymington)
Author Bio
As a technology and consumer goods specialist for the Fool, Steve looks for responsible businesses that positively shape our lives. Then he invests accordingly. Enjoy his work? Connect with him on Twitter & Facebook so you don't miss a thing.

Summer is officially in full swing, and July is almost upon us. But before you spend all your money on fireworks this year, consider putting some of it to use in the stock market. If you don't mind the excitement of weathering greater volatility in exchange for a potentially higher return, investing in promising small-cap stocks might be a great option.

So we asked three Motley Fool contributors to each pick a small-cap stock they think investors would do well to buy this July. Read on to see which businesses they chose and why.

Steve Symington
Netgear (NASDAQ:NTGR) might be on the larger side of the small-cap spectrum with its market capitalization around $1.55 billion as of this writing. But with its next quarterly report coming up at the end of July -- and on the heels of its fourth consecutive earnings beat in April -- I think the networking hardware specialist has plenty of room to run from here.

Most recently last quarter, Netgear's core retail business continued to lead the way with impressive 30% year-over-year growth in revenue, to $157.5 million, thanks to strong demand for both its high-performance (and high-margin) Nighthawk routers, and its newer Arlo wireless security camera line. And though that growth was offset by a 27% decline in its service provider business unit sales, to $84.3 million, this result was actually better than Netgear anticipated given its move last year to restructure the service provider segment and focus primarily on driving profitability. Meanwhile, Netgear's smaller commercial business saw revenue decline 5.9%, to $79.4 million, but that was again in line with expectations given typical seasonality and a current market lull as small and medium business begin the next upgrade cycle to multigigabit switching solutions.

In the end, when those commercial headwinds abate and as the service provider business settles, the relative strength of Netgear's retail business and central position enabling the Internet of Things should become more evident to the market. Over the long term, I think that will drive continued market-beating returns for investors willing to buy now and watch this growth story unfold.

George Budwell
If you're looking for a small-cap stock with sky-high growth potential, I think Geron Corp. (NASDAQ:GERN) is definitely worth checking out. After slashing its workforce and signing a partnership agreement with Johnson & Johnson's (NYSE:JNJ) biotech subsidiary Janssen to develop its first-in-class telomerase inhibitor imetelstat, Geron's future now hinges on the clinical progress of its singular product candidate as a potential treatment for both myelofibrosis (MF), and myelodysplastic syndromes (MDS).

Because the drug's ongoing trials for MF and MDS aren't expected to produce any major clinical catalysts until 2017, though, Geron's stock has failed to capture the market's attention of late and is now trading close to its 52-week lows: 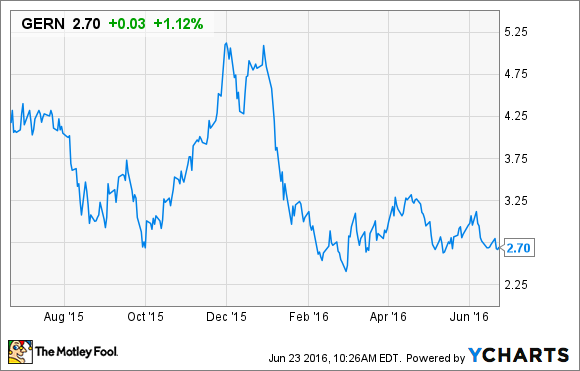 That said, Janssen is scheduled to perform an internal review of imetelstat's mid-stage trial data for both MF and MDS in the second half of 2016.  Although we aren't likely to learn many details about these preliminary data analyses, the lack of any significant changes to the designs of either study -- or an outright halt due to toxicity issues -- should breathe some life into Geron's battered stock. After all, imetelstat does have the potential to become a breakthrough drug for several hard-to-treat blood-based cancers, and J&J has already earmarked this experimental cancer drug as one of its next possible blockbuster products.

Sean Williams
Small-cap stocks are among my favorite to research, and this July I have my eyes squarely on wireless communications solutions provider CalAmp (NASDAQ:CAMP) following its disappointing fourth-quarter earnings release in mid-April, which has weighed on shares ever since.

CalAmp, which is best known for providing wireless data communication solutions for the Internet of Things (IoT), allowing machines to be able to seamlessly communicate with one another, announced in April that it was losing satellite service provider EchoStar (NASDAQ:SATS) as a longtime customer. EchoStar is in the process of consolidating its suppliers, thus it decided not to continue its partnership with CalAmp. And since CalAmp generates nearly all of its satellite revenues from EchoStar, it decided to simply shutter the division.

This news took shareholders by surprise and, once again, caused downward revisions in CalAmp's fiscal 2017 sales and profit estimates. But the 27% tumble in CalAmp shares year to date in 2016 could provide the perfect entry point for patient investors, especially when taking into account that DataCom accounted for 83% of its fourth-quarter 2016 revenue, and satellite was just 17%.

First, CalAmp investors can take advantage of huge organic growth opportunities in IoT. From smart appliances to smart cars, the digitization of the things around us is ongoing, and that should translate into a long-term double-digit-percentage growth opportunity for CalAmp. In November, Gartner suggested that some 20.8 billion IoT units will be installed by 2020, a quadrupling from 2015, and spending should increase to $3 billion by the end of the decade, up from $1.2 billion in 2015. This trend is CalAmp shareholders' friend.

The other key catalyst is inorganic growth. CalAmp recently completed the acquisition of Lojack -- the company best known for helping track stolen vehicles -- for $134 million. The move is expected to add $0.15 to $0.25 per share to CalAmp's fiscal 2017 earnings, as well as improve the company's working relationship with U.S. automakers with whom it's attempting to expand the scope of its existing wireless solutions. Considering that CalAmp ended fiscal 2016 with $89 million in net cash, and is healthfully cash flow positive, more acquisitions aren't out of the question.

A PEG ratio below one and forward P/E of less than 10 make CalAmp an intriguing stock to consider buying this July.