If you want to generate real wealth in the stock market, consider picking up shares of these compelling businesses.

For any investor looking to put money to work in the stock market over the long term, it seems easy to say one of the primary goals is to generate or sustain wealth. But finding the right stocks to do so isn't always that simple. So we asked three of our contributors to choose one stock they believe could make investors rich. Read on to see which companies they chose and why:

Jason Hall: When it comes to creating wealth with stocks, the most effective approach is to invest in great companies with solid long-term prospects to continue growing, with minimal risk of disruption from competitors or technological irrelevance.

This can sometimes mean choosing very "boring" companies, of which I think Brookfield Infrastructure Partners (BIP -2.93%) could be considered. Brookfield Infrastructure owns and operates assets including electricity transmission and distribution, railroads, ports, energy transportation and storage, and telecommunications infrastructure on five continents. These are the kinds of assets that the world depends on and often produce incredibly dependable cash flows, yet very few people actually ever think about. They are often also regulated, which can further limit competitive entry.

Lastly, Brookfield Infrastructure targets annualized total returns between 12% and 15% on average over the long term. This may not sound like a good way to get rich, but it's a pretty remarkable rate of return, if management can deliver on it. And since going public, they have: 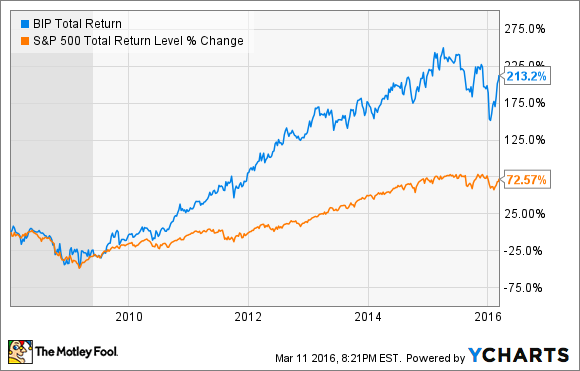 In summary, you don't have to find the "next big thing" to get rich with stocks. Sometimes it's just a matter of investing in incredibly important, long-lived assets that people never think about, but everyone depends on. That's Brookfield Infrastructure's business.

George Budwell: As stocks that could make you rich tend to come with a fairly high amount risk, these types of investing vehicles aren't for the faint of heart. Having said that, there are some small-cap biotech stocks such as Geron Corp. (GERN 8.38%) that offer compelling risk-to-reward profiles right now -- and that could make patient investors a lot of money.

Geron is an all-or-nothing biotech stock. After struggling for decades to produce a viable commercial product, the company decided to put all of its efforts behind developing the telomerase inhibitor imetelstat as a first-in-class therapy for a host of high dollar blood disorders such as myelofibrosis and myelodysplastic disorders. To reduce expenses, Geron also slashed its workforce to a mere 19 employees and subsequently turned the keys over to Johnson & Johnson's (JNJ -0.77%) biotech subsidiary Janssen to carry out imetelstat's mid to late-stage clinical program.

Bottom-lining this pick, Geron's stock could soar if imetelstat continues to produce unprecedented response levels, and Janssen decides to sally forth with the drug's clinical program into late-stage trials. After all, the blood cancer market is already valued at over $24 billion per year, and that's for a cohort of treatments that rarely produce durable responses. Of course, the one serious risk factor is that imetelstat's safety profile has been problematic in the past -- even forcing the FDA to temporarily put the drug on a partial clinical hold in 2014.

All told, Geron is certainly a risky stock -- but investors looking for ultra-high growth opportunities may want to take a deeper look based on the very real possibility that the company could be developing a game-changing cancer drug.

Steve Symington: Sierra Wireless (SWIR 3.72%) may not be in the market's good graces of late, but I think the Internet of Things pure play has what it takes to create serious wealth over the long term. Most recently, Sierra Wireless plunged last month after the company revealed that fourth-quarter revenue declined 2.8% year over year, to $144.8 million -- below guidance for revenue of $148 million to $151 million -- while adjusted net income plunged 72% over the same period, to $2.5 million.

For that weakness, management blamed softer demand at certain OEM customers given what they believe is "caution [...] in the face of an uncertain macro-economic environment." But while we can't ignore the negative effects of the economy on any company, this should only be temporary and doesn't reflect an underlying problem with Sierra Wireless' actual business.

But Sierra Wireless also added fuel to the fire with lighter-than-expected guidance, calling for revenue in the current quarter to be flat to lower on a sequential basis. To blame in this case, however, was a combination of timing of orders from a single large automotive customer, as well as the ongoing transition by OEMs to a new processor platform for enterprise notebooks. Here again, these are issues of timing, and not indicative of the strength and industry leadership position Sierra Wireless continues to boast.

What's more, Sierra Wireless CEO Jason Cohenour insisted the business should gain momentum as we get deeper into the year, in part as it enters commercial production on several new customer programs. As a result, I think this is a perfect chance for opportunistic long-term investors to buy Sierra Wireless before that momentum becomes evident to the rest of the market.

3 Stocks Billionaires Can't Buy, but You Can

3 Small-Cap Stocks to Buy in July