I have to be honest... I'm worried about the stock market. We've had a long bull run since the last notable downturn, and frankly, the world hasn't really improved much financially in my eyes since the 2007 to 2009 recession. Which is why I've refocused my portfolio around high-quality businesses that I think can stand up to any test the market throws at them. In fact, I'm still quite fond of my three-biggest stock holdings Nucor Corporation (NYSE:NUE), International Business Machines (NYSE:IBM), and Eaton Corp. (NYSE:ETN). Here's why.

Nucor is easily one of the largest and best U.S. steel mills. It has a heavy reliance on electric arc furnaces, which are more flexible and cheaper to run than older blast-furnace technology. That's allowed Nucor to react more quickly to challenging steel-market conditions than some peers. For example, Nucor has lost money once during the past decade -- at the tail end of the recession -- while competitor AK Steel has bled red ink each year since 2009, or seven of the last 10 years.

Holding up in the storm is one thing, but there's more to like. For example, Nucor has a long history of rewarding investors with dividend increases. The annual streak is up to 43 years, which obviously includes the tough market since the end of the recession. The annual hikes have been small lately, with the last increase of a little more than 0.5% coming at the start of this year; but that's understandable.

Nucor has a history of investing in downturns to come out stronger when the market recovers. This downturn has been no different. For example, it just agreed to a joint-venture deal to build a steel mill in Mexico focused on the auto sector. Nucor has seen growing demand in that sector for its products.

I basically own Nucor because I think it's going to survive the difficult steel market, pay me well along the way, and come out the other side capable of reaching higher business highs in the future -- and equally important, higher lows.

My next-largest holding is IBM. I won't pretend that I understand everything this technology giant does, but I know that it has a great brand name, a solid reputation, and a Rolodex to die for.

For example, in the company's 2014 annual report, CEO Virginia Rometty noted that IBM works with "90 percent of the world's top banks, 9 of the top 10 oil and gas companies, 40 of the top 50 retailers and 92 of the top 100 healthcare organizations." Those numbers will wax and wane over time, but IBM has its fingers deep into the daily grind of the business world.

I'm willing to give the company some time. For starters, it generates a huge amount of free cash. In fact, according to the company, cash flow was 110% of GAAP net income in the 12 months through April. It's using that cash to both invest in its future, and reward shareholders with dividends -- 21 years of annual increases -- and stock buybacks. While it's true that the buybacks are helping to shore up earnings, IBM has the cash flow to keep the buybacks going while it goes through its transformation.

Here's the lynchpin for me: Transformation isn't something new to IBM. It's more than 100 years old, and has remade itself many times over. I'm happy to wait for the company to figure out the current business shift, just like it has so many others. 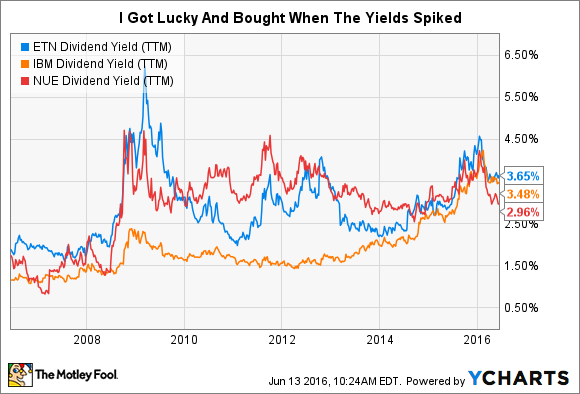 My third-largest holding is Eaton Corp. Eaton is a massive global-industrial conglomerate focused on power management. That hasn't been a great business lately, with organic sales feeling the pressure of weak markets around the world. This year is going to be another tough one, with management expecting organic sales to decline as much as 4%. The company is working hard to streamline its operations so it can maintain profit margins in the face of weak end markets.

This is one of the main reasons I like the company. Despite the difficult market, Eaton is expecting to earn between $4.15 and $4.45 a share this year. The mid-point of that guidance would represent a year over year gain of a few cents a share, despite the expectation of relatively weak sales. A large and varied product portfolio and customer base provide a lot of support to that expectation. But, perhaps more important, that's plenty of money to keep paying the annual dividend of $2.28 per share. And the company isn't just sitting around waiting for better days, it's actively cutting costs to preserve and improve margins across its various business segments--adjusting along with the market to ensure its continued success.

I'll keep reinvesting that dividend while I wait for the global economy to right itself. The longer that takes, the better, actually, because it will keep investors away from Eaton's stock, and my dividend payments will buy more shares of this more-than-century-old company. Oh, and like IBM, Eaton has been using its cash flow to buy back its own shares, so I'm investing along with the company here, too.

If you look at my top holdings, there are a few things in common. First, they all pay me to own them. Second, they are all large companies with long histories of adjusting and changing to market environments over time. Third, they are all facing difficult periods right now.

I hope to own these stocks for a very long time, and I'd see a share-price decline in any of them as a buying opportunity. Simply put, they've stood the test of time before, and I expect they'll all live through the trials they face today. And I'll profit as they do, while getting paid to wait for those better days.