The UK and European Union split will impact these companies. The question is, how much, and for how long? Image source: Getty Images.

What: Shares of a handful of major industrial corporations took a big hit on June 24, following the U.K. vote to leave the European Union. The hardest-hit stocks include Huntsman Corporation (NYSE:HUN), CNH Industrial NV (NYSE:CNHI), and CRH PLC (ADR) (NYSE:CRH): 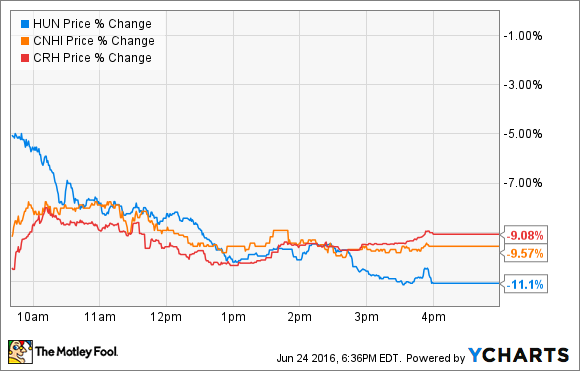 At some point today, all of these companies' stocks were down more than 10%.

So what: This is definitely a "Brexit"-driven drop, as all three of these companies have substantial exposure to Europe and the United Kingdom. Huntsman Corporation is based in the U.S., but the chemical manufacturer generated 28% of its 2015 revenues in Europe.

London-based CRH does big business around the world, and is the second-largest building-materials company on the globe. It will almost certainly feel the affects of changing trade dynamics once the U.K. officially exits the eurozone. In 2015, 37% of the company's sales and 27% of EBITDA were derived from European operations.

CNH Industrial is also based in London, and manufactures heavy-duty farming and construction equipment, commercial vehicles, and buses, among other things, and counts on EMEA -- which is primarily countries in Europe, the Middle East, and Africa -- for nearly 60% of total sales. Of this geographic segment, Europe is by far the largest market. Furthermore, 50% of the company's revenue is conducted in euros, while 2% is in British pounds, and 26% is in U.S. dollars.

Bottom line, all three of these companies have enormous exposure to Europe, and the unraveling of the ties between Britain and the EU will have repercussions.

Now what: The harder thing to know is exactly what those repercussions will be. On the one hand, it's likely to remain "business as usual" for most business operations for months to come. On the other hand, it's likely that companies with operations in both the U.K. and EU-member countries will start working to reorganize relatively soon, based on what is in the best interest of that particular business.

The problem is that there's still more that we don't know than we do. The U.K. must now negotiate separate trade deals with each of the EU-member countries individually, and that process is likely to take years to complete. For companies like these three, which all operate manufacturing facilities in multiple countries across Europe, the U.K., and in other countries around the globe, it's almost impossible to predict what the repercussions will be, and how these companies will have to adapt to the changes that will come.

While I wouldn't necessarily sell on the concerns that affect these companies -- after all, their competitors will also be impacted -- I probably wouldn't buy on this drop just yet, either. There's a lot of uncertainty, and very real risk that the uncertainty alone could cause economic weakness, and send one or more European countries -- particularly the U.K. -- into recession.

For these particular companies, it's probably a good time for investors to sit back and watch. There could be a good buying opportunity on the horizon, but there's too much uncertainty surrounding the impact on Europe's economy for me to consider any of these companies worthy of picking up on this dip. This is especially so because none are selling for particularly "cheap" valuations.