What: Shares of International Business Machines (NYSE:IBM) are up 12% so far this year as of market close on June 21, according to data provided by S&P Global Market Intelligence. The company's ongoing transformation has led to years of revenue declines, which in turn drove down the stock price. Pessimism peaked early in 2016, and a strong recovery since then has propelled IBM stock higher in 2016. 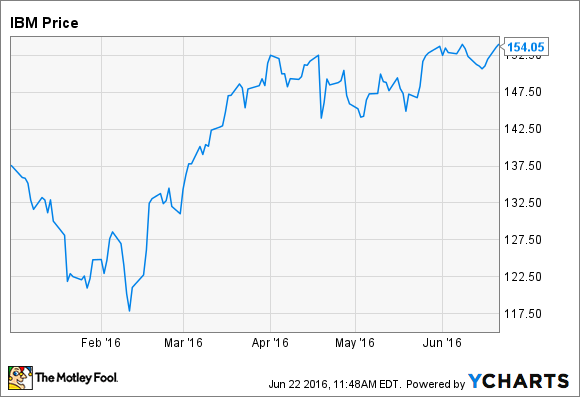 So what: IBM reported its fourth-quarter results in January, beating analyst estimates on all fronts. But the company's guidance for 2016 of "at least $13.50" in per-share adjusted earnings represented a decline compared to 2015. Currency exchange rates were one reason for the lackluster guidance, but the company also pointed to delayed software signings hurting its results.

IBM stock bottomed out in February, briefly dropping below $120 per share. Since then, IBM has surged for a few reasons. Despite the company's weak results, a single-digit PE ratio is incredibly pessimistic, and investors looking for bargains no doubt took advantage of that low price.

IBM announced various acquisitions over the past few months that may have helped improve investor sentiment toward the stock. IBM bought Truven Health Analytics in February for $2.6 billion, with the goal of integrating the company's technology and data into its Watson Health business unit. Cybersecurity company Resilient Systems was also acquired in February, boosting IBM's fast-growing security business.

March brought two more acquisitions: Optevia, a cloud software integrator, and Bluewolf Group, a cloud software consulting company. These deals made it clear that IBM's cloud strategy isn't simply to compete on price with big players like Amazon's AWS, but to focus on areas where the company could bring value to its clients.

A solid first-quarter report in April allowed IBM to maintain these gains. The company again beat analyst estimates on all fronts, and it boosted its free cash flow guidance for the full year. A $1.2 billion tax benefit seemed to taint the company's results, but that benefit was completely offset by one-time restructuring charges.

Now what: IBM stock is still down substantially over the past few years, and the company's ongoing transformation, while showing progress, has yet to produce growth. There's still quite a bit of pessimism surrounding IBM, and it may take years before it becomes clear whether IBM's strategy will ultimately pay off.