Technology advances are what's behind the advent of 3D printing, but that doesn't mean technology companies are going to be the driving force behind the implementation and growth of the industry.

Here's one somewhat unexpected company you might not have considered that's poised to dominate what could be a key 3D printing niche.

When you think about 3D printing, names like 3D Systems and Stratasys probably come to mind. And why not? These companies are key players in the space, but they aren't the only names to watch. Here's one you might not have thought of that's poised to use 3D printing to change the way precision aircraft parts are made: Alcoa Inc. (NYSE:AA).

That's right -- Alcoa. This company is probably best known as an aluminum maker. But it's been building up its specialty parts business by focusing on aerospace, spending around $4.5 billion on the acquisitions of Firth Rixson, RTI, and TITAL in the last couple of years as it repositioned its portfolio to focus on areas it believes offer the best growth prospects. Now that the last of these deals has been completed, Alcoa is going to split in two; if everything goes as planned, that process will be completed later this year. One part, keeping the Alcoa name, will continue to produce aluminum, and the other part, to be called Arconic, will focus on specialty parts. Aerospace is expected to make up about 40% of Arconic's business.

The real takeaway here is that Alcoa has gone to great lengths to augment its position as a key supplier of parts to aircraft manufacturers like Boeing and Airbus (OTC:EADSY). And while it's been more than just a bulk aluminum maker for years, it's the company's metals expertise that's at the core of its 3D printing push.

From metal to part

Alcoa's experience with and knowledge of metals is important because the company has relied on this to create the metals and powders needed to print parts of high-enough quality to put into an airplane. Let's step back for a moment and think about that.

Alcoa is making parts with enough structural integrity to sell to the aerospace industry, where life and death hang in the balance. For example, the company signed an agreement with Airbus in April to deliver 3D-printed titanium fuselage and engine pylon parts. To be fair, Alcoa isn't the only company to print airplane parts, and metal printing is hardly new. In fact, Alcoa has been using such printing, or "additive manufacturing" in its business for over two decades. But Alcoa is in a unique position to supply the industry because of its scale, expertise with lightweight metals, proprietary Ampliforge printing technology, and its acquisition-expanded reach within the aerospace industry.

One big driver for the company is its Ampliforge technology, which it says increases the strength of 3D-printed parts beyond what printing alone can achieve. If that claim proves true, and is a durable competitive advantage, Alcoa could very well become a leader in 3D printing for high-quality aerospace parts, a niche that has huge potential because of 3D printing's ability to reduce the parts' weight. 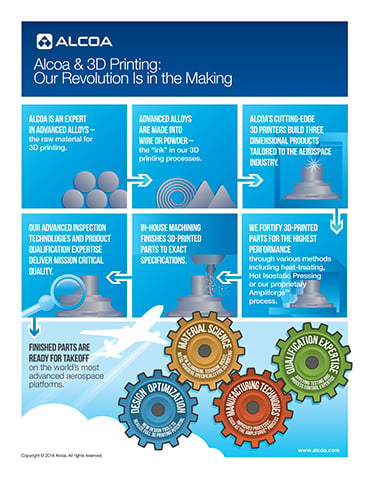 Although printing aerospace parts isn't new, it is begining to -- pardon the pun -- take off, but this business doesn't have much of an impact on Alcoa's top or bottom line today. In fact, it's probably more of a cost center right now than a revenue driver. For example, the company spent roughly $60 million late last year to expand a research and development center so it could speed up its 3D printing plans, and the Airbus deal is the first notable agreement since that investment.

If you're looking at 3D printing as an investment theme, though, you should definitely include Alcoa in your list of companies to watch -- noting that the Arconic spinoff will eventually be the home for this business. But don't expect 3D printing to be the driving force behind Arconic's results -- at least not for a while.

Still, if Alcoa/Arconic can prove out its Ampliforge technology, showing that there is a real advantage in quality, there could be a big future for it in the 3D space -- at least in the aerospace niche. That would include parts-making directly, but it could also involve licensing its technology and supplying the "inks" used in metal printers. And, from a bigger-picture perspective, the aerospace testing ground could easily make Alcoa into a quality leader in other areas, too.