Please ensure Javascript is enabled for purposes of website accessibility
Log In Help Join The Motley Fool
Free Article Join Over 1 Million Premium Members And Get More In-Depth Stock Guidance and Research
By Steve Heller – Mar 19, 2016 at 11:00AM

Are the fundamentals keeping pace with the recent surge in 3D printing stocks? 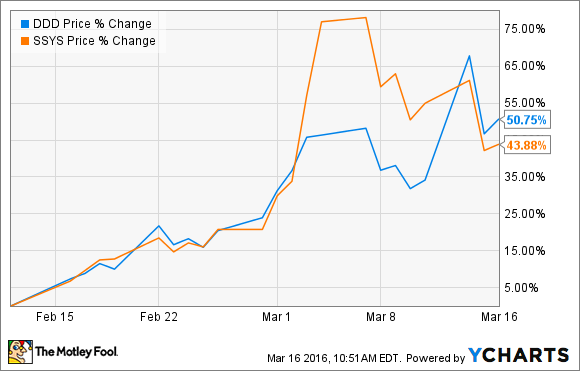 This kind of performance should give an investor pause. After all, when a stock moves sharply in a short period of time, it runs the risk of becoming disconnected from the fundamentals. This disconnect can create an opportunity or hazard, depending on direction.

For 3D printing stocks, the risk is that the underlying business fundamentals, which ultimately drive long-term performance, aren't keeping pace with the recent surge in 3D printing stocks, and prospective investors could have a low margin of safety.

A challenging end to a challenging year
Despite 3D Systems' and Stratasys' recent stock performance, neither company closed out 2015 on a high note. Both companies recently reported that revenue fell in the fourth quarter, reflecting ongoing headwinds facing the industry. Throughout 2015, customer demand for industrial and professional 3D printers notably slowed compared to the previous two years. Stratasys believes that customers currently have an oversupply of 3D printers on their hands that they purchased in earlier years.

To illustrate this weakness, Stratasys' fourth-quarter hardware sales fell 37% year over year, while 3D Systems' hardware sales fell 16%. Hardware sales are a particularly important measure for both companies, because they both employ a razor-and-blade business model that relies on selling 3D printers to then sell high-margin consumables.

Essentially, the fewer 3D printers that either company sells, the weaker its prospects to generate long-term recurring revenue through consumable sales. Ultimately, continued hardware weakness could undermine a major aspect of the long-term investment thesis -- the part where a large installed base of printers fuel recurring sales of high-margin consumables, which, in turn, drives earnings growth.

Stratasys expects to generate sales between $700 million to $730 million in 2016. The midpoint represents a 2.7% increase over full-year 2015 sales. Prior to this guidance, Wall Street expected Stratasys would generate $700 million in revenue. Investors viewed Stratasys' guidance favorably, and sent the stock more than 17% higher.

Justifying the move
Of course, what happened to 3D Systems and Stratasys in the fourth quarter doesn't necessarily have any bearing on what will happen in the future. After all, stocks are considered to be forward-looking mechanisms. It could be argued that investors are now pricing in a better outlook for the 3D printing industry than what 2015 suggested.

Behind the scenes, improvements in short interest are likely at play, which measures the total number of shares that are actively being sold short on a particular stock. The higher a company's short interest, the higher the market's pessimism toward a company's prospects.

Historically, 3D Systems and Stratasys have been among the most-popular stocks for investors to bet that their stock prices will fall. This has undoubtedly weighed on the pair's past performance. However, around the start of 2016, 3D Systems' and Stratasys' short-interest picture began to improve, suggesting improving shareholder sentiment. 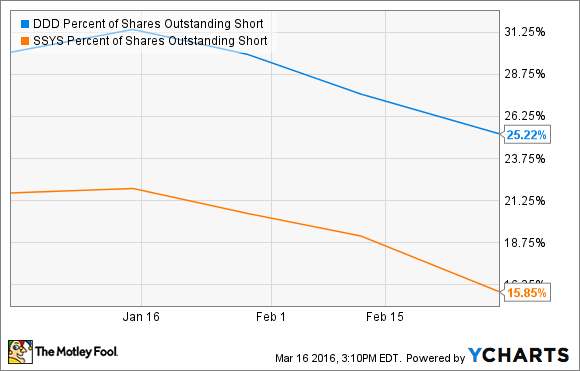 The $1 million question
To recap, 3D Systems and Stratasys have moved significantly higher in the last month. The move appears to be largely driven by improving investor sentiment, measured by falling short interest, and Stratasys' view that the industry isn't expected to deteriorate further. In other words, the recent surge in 3D printing stocks was based on changes in how investors feel about these stocks, which has little to do with improvements in the underlying business fundamentals.

Sure, Stratasys' better-than-expected guidance could be viewed as a fundamental improvement, but 3D Systems did not issue guidance of its own -- a sign that management remains unclear about the future. However, considering 3D Systems and Stratasys share many of the same customers and cater to the same industries, 3D Systems' lack of guidance makes me not want to put too much confidence in Stratasys' guidance.

Finally, it's also possible that investors were being overly pessimistic toward 3D printing stocks before this rally began, and 3D Systems and Stratasys are now merely reflecting that their underlying businesses should be valued more favorably than they were. Even then, it becomes a question of whether 3D Systems' and Stratasys' stock price has a meaningful margin of safety if industry uncertainty persists. That's the big question before buying 3D printing stocks.