What: Absent any company-specific news, shares of 3D Systems (NYSE:DDD) traded significantly lower on Monday. Near the close of the market session, shares of the 3D printing maker were about 9.5% lower, while rival Stratasys (NASDAQ:SSYS) was down about 7%.

So what: More than likely, continued fallout from the surprising outcome of the U.K.'s referendum to leave the European Union is responsible for driving 3D Systems shares lower. Since the "Brexit" was confirmed, 3D Systems stock has lost nearly 16%, while Stratasys has lost almost 14%. 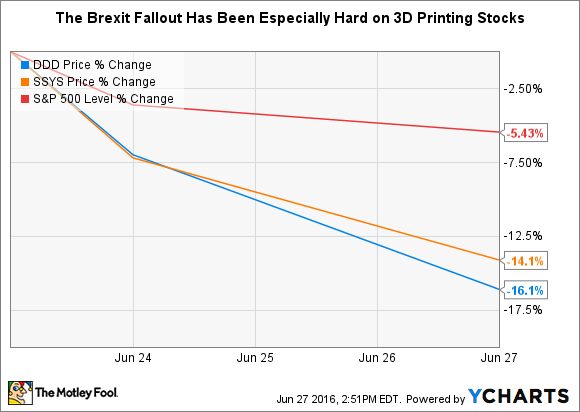 If there's one thing that markets hate, it's uncertainty. It's possible that the uncertainty of the Brexit, coupled with the uncertainty facing 3D Systems and the industry in general, could be driving 3D printing stocks to sell off more than the S&P 500.

After all, 3D Systems is in the midst of a massive transformation to improve its growth prospects and operating performance after it proved a serial disappointment to investors. At the same time, customer demand has slowed notably across the industry; Stratasys believes the slow demand was created by too much 3D printing capacity.

In April, 3D Systems' former CEO, Avi Reichental, was replaced by a 32-year Hewlett-Packard veteran, Vyomesh Joshi, who comes with a track record of significantly improving operating profits. Since his start date, Joshi has wasted no time overhauling management and getting right down to business. The company recently announced that it has replaced its chief financial, operating, and marketing officers, and Joshi has begun his three-part plan to return the company to greater glory. The plan involves listening and learning, setting strategy, and reorganizing the company to support any strategy changes.

Now what: While it's encouraging that Joshi is cleaning house and distancing the company from its previous management, investors have little insight into how these changes will result in improved performance. Until there is greater clarity about whether 3D Systems is showing signs of improvement, the clouds of uncertainty currently looming over the stock are likely to remain. In other words, investors may not be willing to bid up shares as markets assess the fallout from the Brexit.