What: Over the past several market days, shares of industrial cryogenic gas processing equipment manufacturer Chart Industries, Inc. (NYSE:GTLS) have taken a beating. As of this writing after market close on June 27, shares have fallen 17.8% since the market first reacted to the news that United Kingdom voters had chosen to leave the European Union: 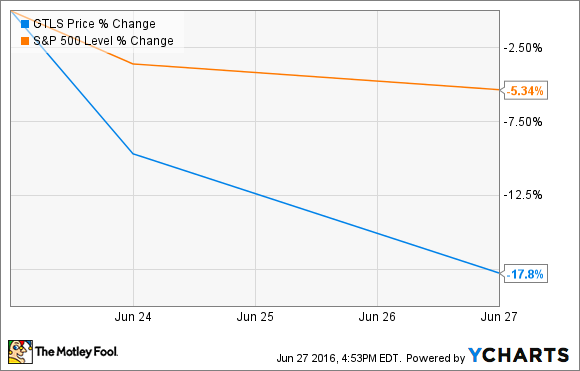 So what: It looks as if the market is fearful over how the Brexit will affect the economy, and Chart Industries does a pretty decent business in Europe. Last year, about 19% of Chart's sales were in Europe, the biggest share of sales coming from its distribution and storage segment, the company's largest. Furthermore, one-third of the company's biomedical equipment sales come from Europe. And while this is Chart's smallest segment, it also provides the company's highest-margin products.

Furthermore, Mr. Market is also fearful of how the Brexit will affect Europe's economy in general. If there's an economic slowdown as a result, it would probably hurt Chart's sales for at least some period of time.

Now what: Chart Industries is a business operating in a cyclical industry, and its management team is familiar with the threat of downturns. The company has already made significant changes to its business structure over the past couple of years, including shuttering facilities and cutting operating costs. And while those efforts have been largely because of the slowdown in the energy industry and in Asia, they will certainly help the company ride out any slowdown that may -- or may not -- happen in Europe in coming months or years.

The Brexit might slow sales a little for Chart, but it's not likely to be more than a speed bump at worst. In other words, this is probably better viewed as a fearful market selling a solid business than a sign of a company in trouble.