Over the past couple years. Apple (NASDAQ:AAPL) has been plowing $87 billion of its cash into something that will positively impact the company's earnings per share for the next 10, 20 years and beyond. So far, that investment has been meet with scrutiny as a waste of money that is timing the market completely wrong. No, it's not the company's rumored car project or some venture into artificial intelligence, that $87 billion investment went into buying the company's stock.

Of all the things that management teams get scrutinized for, stock buyback programs probably get the most. Yet, if we look at the impact that a robust and sustained share repurchase program can have on the company's financial statements over the years, it's hard to argue against them. Let's take a look at why analysts are so quick to judge moves like Apple's and why those statements may not be in the best interest of investors with much longer investing time horizons.

If you were to browse financial and investment columns about stock buybacks, chances are most of the stuff you will read is negative. Financial pundits and talking heads are very quick to point out when a company doesn't time a stock buyback just right -- like in the case of Apple -- or that they are killing shareholder capital when shares drop over a couple of months. Heck, they'll even point out that stock buybacks are a way to juice stock returns and that those companies that do don't perform as well as those companies that don't buy back stock at all.

Let's unpack these two ideas for just a moment.

The idea that companies that buy back stock are likely to underperform those that don't likely relates to where those respective companies are in their life cycle. A company that is buying back lots of stock likely generates a lot of cash flow and is in a mature market where growth is constrained. Conversely, a company that doesn't buy back stock -- or even issues new shares -- is likely to be a younger company that is still in a rapidly growing market and needs all the capital it can to grow the business. Typically, those higher growth companies are also rewarded with higher valuation multiples.

Then there is the idea that a stock's price dropping is a validation of why share repurchases don't work. To that, I'll just ask this question. If a company like Apple were to make an $87 billion investment in a new product, would you consider that investment a failure if it doesn't move the company's stock price in six months?

To the investor who is more focused on the longer term, stock buybacks can be a very powerful tool that a company can deploy to benefit shareholders. The key to seeing their value is the time horizons. Over decades or more, share repurchases can help support better long-term earnings-per-share growth and make dividend payouts to shareholders that much easier to sustain. Here's how.

I know I'm not the first person to use AutoZone (NYSE:AZO) as an example of the positives of share buybacks. Over the past 20 years, the company has repurchased close to 80% of its shares outstanding and it has led to an incredible stock price growth of 2,100%!

Instead of simply leaving it at that to show the effectiveness of share buybacks, let's do something a little different. If AutoZone hadn't repurchased all those shares over that time frame, could it have achieved the same level of returns? Some Wall Street gurus will argue that reinvesting that money in the business will generate superior returns. If we look at what AutoZone would have needed to do to achieve similar results, though, that theory looks a little far-fetched.

Here's a quick comparison of the company's financials between 1996 and the past 12 months. 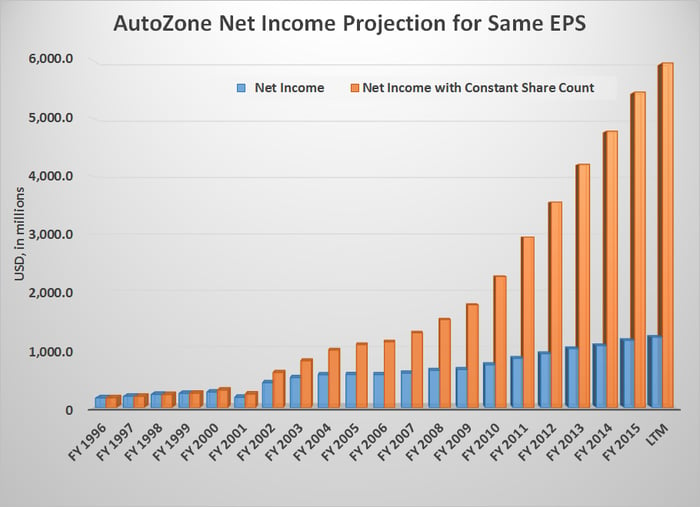 Based on its net income margins in each given year, here's what revenue would have been. 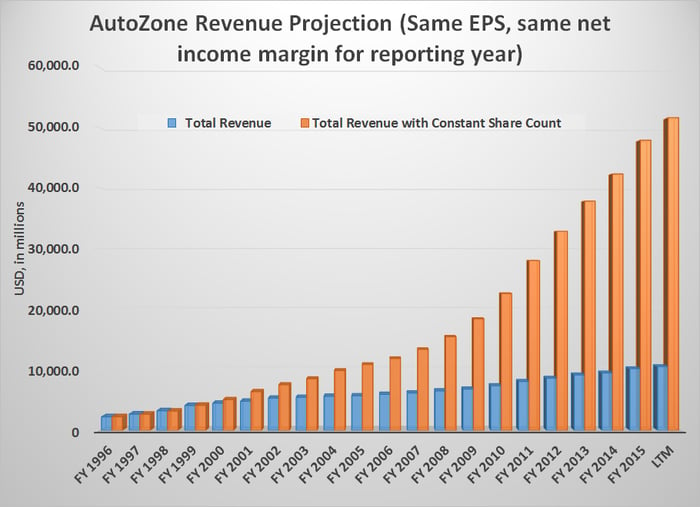 Here's what is significant about that $51 billion in revenue to meet today's earnings per share with a constant share count. That is close to double the total revenue that AutoZone and three of its largest competitors -- Advance Auto Parts, O'Reilly Automotive, and Pep Boys -- generated in the past 12 months... combined.

Perhaps in some finance theory there is evidence to support the idea that reinvested cash flow will lead to better returns over the long term. Most of these finance cases exist in a vacuum, though, and don't account for the realities of a business or a market. Maybe AutoZone could have found new business segments that could have led to similar earnings-per-share growth without buying back its shares. Looking at those charts, though, the chances of that seem much less likely than the path that it followed.

We mostly view dividends and share repurchases as the two levers that a company can pull in order to enhance shareholder value. To many investors, that quarterly cash check is a great way to supplement income, or can be used to increase one's stake in a company for decades and greatly increase your total return. Considering the high regard in which investors view dividends, share repurchases over time can be forgotten. If you look at dividends and share buybacks over time, though, those share buybacks can actually support dividend growth.

Integrated oil and gas company ExxonMobil (NYSE:XOM) is a great example. Ever since Exxon acquired Mobil back in 1999, the company has reduced its share count by 40% by spending $256 billion on share buybacks. Over that same time period, the company has grown its dividend every year at a compounded annual growth rate of 8.3%. To achieve its current payout, the company spends $12.3 billion annually to pay its shareholders.

So let's do the same thing as above. What if ExxonMobil had elected to forgo those share repurchases? The company would need to shell out an additional $8 billion this year alone. This is why share repurchases can be helpful for companies in cyclical industries such as ExxonMobil. As oil prices have plummeted over the past two years, cash flows have become scarce. Management has put the brakes on stock repurchases for now to reduce cash outlays without the dividend taking a hit. Had ExxonMobil not made those investments to reduce share count, today's dividend would look very much at risk of getting cut.

ExxonMobil isn't the only case. Take a look at the difference in payout for IBM had it eschewed share repurchases over the past 20 years... 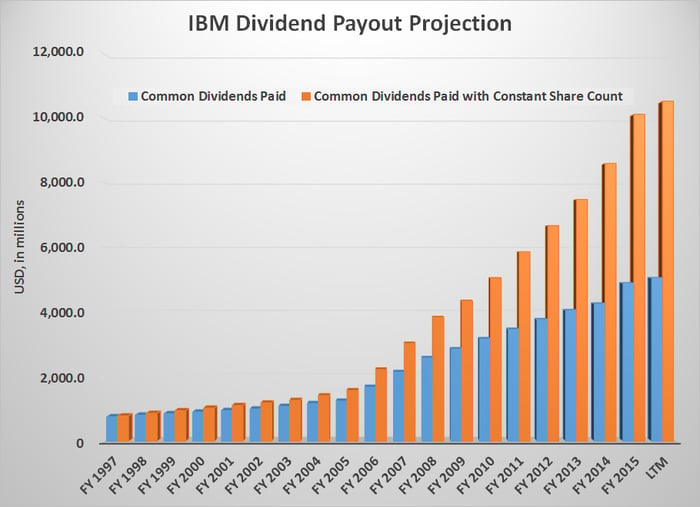 ... or if McDonald's wasn't working to reduce its share count. 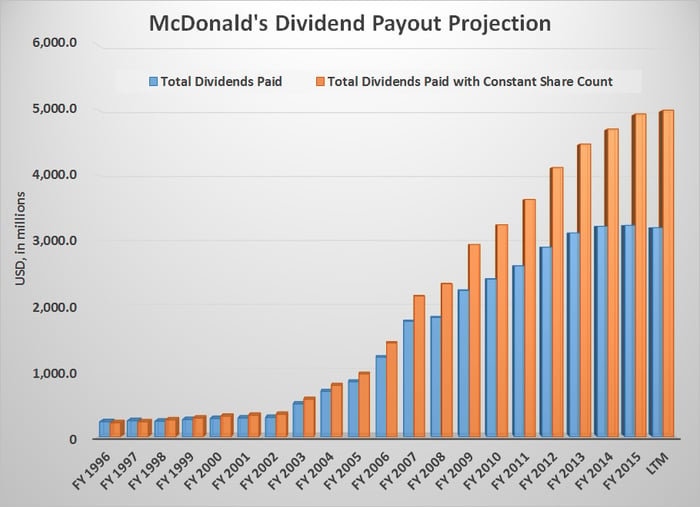 A stock buyback program can be a polarizing topic. It's so easy to point out that a company didn't time its stock repurchases just right because we are inundated with the ups and downs of the market every day. To that, I would say two things: 1) Find me a stock picker/hedge fund manager that has timed purchases of a stock to perfectly capture a stock at the bottom. Based on the performances of some of the most well-known money managers over the years, they're no better at it, either. And 2) If you are worried that a company is wasting shareholder money on buybacks at what is considered a bad time in hindsight, then don't pressure them into doing buybacks at the wrong time in the first place.

Companies like Apple will likely continue to get flack from the Captain Hindsights of the financial world about how their share repurchase programs were ill-timed or whatnot. As someone who is looking to invest in a company over the very long term, keep this in mind. Even though Apple "lost" $15 billion by not timing its repurchase of its stock just right, those same repurchases mean $1.5 billion less in dividend payments and its net income will be spread out over 12% less shares this year. Chances are if Apple and others continually buy back shares at these strong rates over decade-long time horizons, very few of us investing over that time period will care about a six-month price movement.