Shares of Las Vegas Sands (NYSE:LVS) have fallen more than 15% over the past three months due to ongoing concerns about Macau, its largest market. Tighter regulation of casino and junket operators, an anti-corruption crackdown in China, and a nationwide economic slowdown have all darkened Sands' outlook.

But despite those bleak numbers, Las Vegas Sands stock is starting to look fundamentally cheap and its dividend yield is hovering near an all-time high. Should value-seeking income investors take a closer look at this beaten-down stock?

Las Vegas Sands currently trades at 20 times earnings, which is lower than Wynn's (NASDAQ:WYNN) P/E of 33 and the average of 24 for the resorts and casinos industry. Its other main rival, MGM Resorts (NYSE:MGM), failed to generate annual profits for the past four years.

Las Vegas Sands pays a forward annual yield of 6.5%, which is much higher than its yield of around 2% when the dividend was first introduced in 2013. Wynn pays a forward yield of 2%, while MGM doesn't pay a dividend at all. However, Sands' hefty dividend yield is arguably unsustainable, since the company spent 137% of its free cash flow over the past 12 months on dividends. 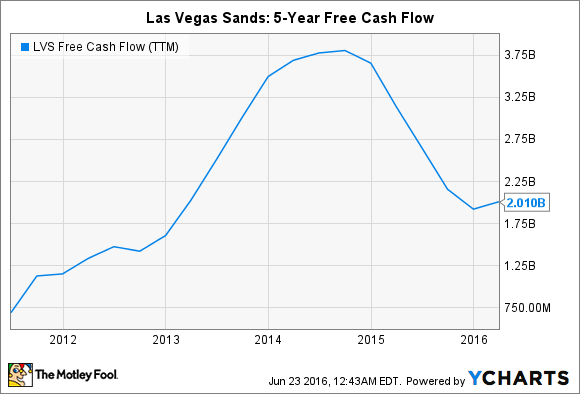 Sands' free cash flow position might improve after the opening of the Parisian boosts its room count by 31% in the second half of the year. However, Sands plans to build two more properties on the Cotai Strip and is considering opening new resorts in Japan and South Korea -- which will all cause FCF levels to drop. Therefore, I wouldn't be surprised if Sands followed Wynn's lead and slashed its dividend.

Plenty of headwinds, not enough tailwinds

Macau Chief Executive Fernando Chui estimates that total casino revenues in the region will fall to $25 billion in 2016, its lowest level since 2010. But as that market shrinks, rivals like Wynn, MGM, Melco Crown, and Galaxy are all opening new properties. With more companies fighting over a smaller market, Sands' top and bottom lines will inevitably decline.

Nomura Securities analyst Richard Huang recently warned that soccer fans staying home to watch Euro 2016 could cause June gaming revenue to tumble to a 5-year low. A recent Morgan Stanley survey of 1,000 Chinese gamblers also found that 30% might visit Macau less after Disney's Shanghai Disney opens. The same survey found that 26% of respondents would gamble more in Macau just because they wanted to visit the new Wynn Palace -- which could pull traffic away from Sands' Parisian. But on the bright side, Morgan's poll found that Sands' Venetian remains the most popular casino in Macau, with 46% of respondents planning to visit.

Las Vegas Sands might catch the eye of investors looking for stocks trading with below-industry average multiples and high dividend yields, but the headwinds facing the casino operator won't dissipate anytime soon. Therefore, Sands might look cheap, but investors are probably better off ignoring it for now.