NVIDIA isn't inside of these new consoles, but a rising tide could lift this boat.

Software giant Microsoft (MSFT -2.00%) recently announced that it will be launching a next generation game console, codenamed Project Scorpio, in the 2017 holiday season. Project Scorpio promises to deliver a substantial boost in performance relative to the current generation Xbox One and Xbox One S consoles. This is expected to enable a dramatic improvement in the visual quality of games on the platform.

Although the new console should serve to stimulate hardware revenue for Microsoft and should allow game studios to rake in some easy cash by selling remastered versions of older games, there's another potential beneficiary here: NVIDIA (NVDA -1.06%).

NVIDIA isn't in the console, but games should become much more demanding

NVIDIA isn't going to supply the processing components into the next generation Xbox. As far as gaming goes, NVIDIA's primary exposure to the market is through the sales of high performance graphics processors for personal computers.

Most visually rich personal computer games are produced in tandem with the variants that land on the two major game consoles: Xbox and PlayStation. These games are incredibly expensive to produce, which means that game publishers want to reach as broad an audience as possible to increase the odds of getting a good return on investment (the game industry is quite brutal).

Many of these games still come with additional visual features for owners of high end gaming PCs so there's still clear incentive to play these cross-platform games on high end PCs rather than consoles.

That being said, given that the game consoles are the development targets for these games, the more powerful the mainstream consoles are, the more developers will invest in higher quality visuals. This should raise the bar for the hardware that a gaming-capable PC will have.

The bar goes up a lot

Microsoft says that Project Scorpio will feature more than six teraflops (a teraflop is a trillion floating point operations per second) of graphics compute capability. This means that in terms of raw horsepower, the new Xbox should be faster than NVIDIA's GeForce GTX 980 -- the company's flagship graphics card released in late 2014.

In fact, it should be right up there with NVIDIA's recently released GeForce GTX 1070, at least in this metric.

A point that NVIDIA's Jeff Fisher made in an investor presentation back in April is that game console class performance essentially represents the "new baseline" of what PC gamers should have in order to have a good experience (NVIDIA seems to define it as being able to play games using 1920x1080 resolution at 60 frames per second). 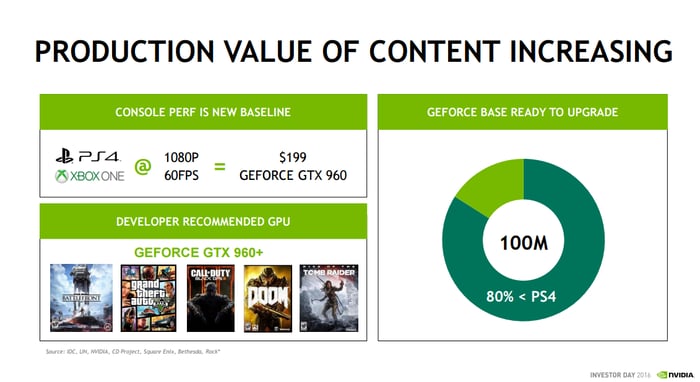 Fisher's presentation showed that, at least at the time, roughly 80% of the GeForce installed base had graphics cards slower than the graphics processor inside of the PlayStation 4. Once Project Scorpio launches, that bar should go up substantially.

A higher bar should mean that current GeForce users that have been holding on to older cards may finally feel compelled to upgrade to new, higher performance cards. The downside to this, though, is that some PC gamers might feel that the consoles have become "good enough" and, depending on the pricing of the consoles relative to a new graphics card/new PC, could "defect" from PC gaming to console gaming (which would be negative for NVIDIA).

That said, the growth NVIDIA has enjoyed in PC gaming since the last new console introductions suggests that the net effect is more likely to be positive than negative.

What NVIDIA has to do in order to capitalize on this

By the time the new consoles roll out, NVIDIA is going to need to have a product portfolio that looks much different than it does today. In place of the current $199 GeForce GTX 960, the company will need to deliver something close to today's GeForce GTX 1070 for approximately that price. The 1070 is expected to hit prices as low as $379.

The company will also need to offer graphics processors at higher price points that deliver substantially better performance than Project Scorpio. The GeForce GTX 1080, NVIDIA's current flagship graphics processor, can deliver around 9 teraflops of compute performance so it's already there. However, the larger the gap, the more likely it is that PC gamers will find value in shelling out for high end cards.

The good news is that NVIDIA's upcoming GP102 is likely to be significantly faster than the GTX 1080, which is based on the GP104 chip. Further, I expect NVIDIA to transition its gaming products to its next generation Volta architecture sometime in the first half of 2018, which should allow NVIDIA to further widen the performance gap between the consoles and its PC-oriented graphics processors.

In other words, NVIDIA can't let up on the performance increases that it delivers across its product stack.