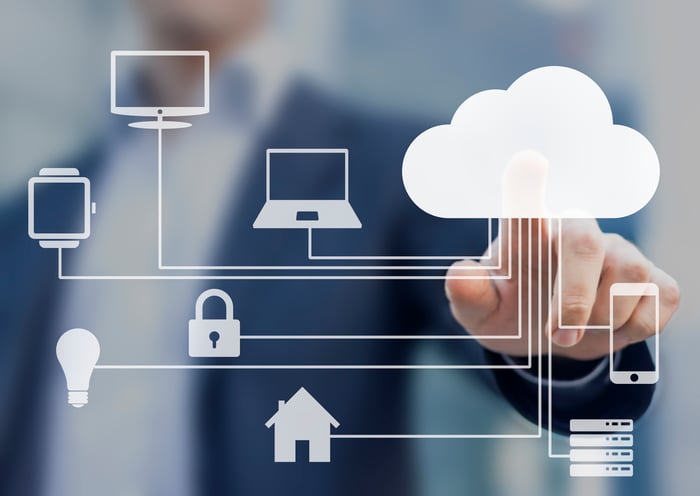 Qualcomm (NASDAQ:QCOM) announced a handful of modems aimed at the Internet of Things (IoT) market at the beginning of this year, and this week the company proved how well they're doing. The company said the Snapdragon X5 (9x07) and MDM9207-1 modems have received 100 design wins from more than 60 original equipment manufacturers.

The two modems vary in their uses, with the X5 aimed at both mobile broadband and IoT devices. The modem can handle download speeds up to 150 Mbps, which is much higher than most IoT devices will need. Meanwhile, the MDM9207-1 has a maximum download speed of 10 Mbps and a power-save mode that enables it work for up to 10 years off just two AA batteries. That's a very important feature, as wide-scale IoT devices will need to last for years to be effectively deployed.

Qualcomm's no stranger to creating superior modems that are used across a broad spectrum of devices, so why are these modems so significant? Because Qualcomm is increasingly focusing its attention on earning more IoT revenue.

The IoT market is projected to be worth $7.1 trillion by 2020, according to IDC, with billions of formerly unconnected things tapping into the internet.

Qualcomm has had a good run in the mobile modem market, but it's now looking to the IoT for more growth. The company doesn't break out its IoT revenue specifically, but in fiscal 2015 its QCT segment brought in $1.7 billion from "adjacent opportunities" (which includes the IoT, automotive, mobile compute, and networking) . Investors are left a bit in the dark as to how well Qualcomm's IoT business is growing right now, with all of these categories lumped together.

But Qualcomm's IoT opportunities don't just come from is modem sales. The company's also built a strong IoT patent collection, just as it has with mobile, to help give it a leg up on the competition.

Qualcomm currently holds 724 IoT patents, with Intel (NASDAQ:INTC)  following behind at 688. And 157 of those patents are "high-strength" -- meaning that they're very valuable -- according to research by LexInnova.  Qualcomm holds the vast majority of these high-strength IoT patents, but Intel falls to the No. 5 position, with only 40.

That might be bad news for Intel, which is looking to the Internet of Things as one of its primary focuses. The company recently laid off 12,000 people as it repositions itself of the IoT and other growing markets, and away from PCs. Intel earned $651 million from its IoT department in Q1 2016, a 22% year-over-year increase.

Things haven't been very smooth for the company as of late, with fierce competition from China-based vendors, its stock price having dropped 17% over the past year (11% before Brexit pushed the markets down), and a slowdown in mobile forcing the company to focus on new revenue streams.

Qualcomm's IoT modems are just one part of the company's IoT focus, of course, but it's a big one. With billions of IoT connections on the horizon, Qualcomm is in a position to apply its experience in mobile to the IoT. It already appears to be doing that well, but investors will have to see if revenues will follow. Qualcomm said earlier this year that its total serviceable addressable market will reach $100 billion by 2020, and that $15 billion of that figure will come from the Internet of Things. And with its latest modem design wins, it's clear Qualcomm is entering the IoT era in a strong position.

Editor's note: This article has been updated to reflect that Qualcomm doesn't specifically break out its IoT revenue.