There are two reasons for investors to consider buying shares of JPMorgan Chase (NYSE:JPM).

The first is that they've fallen by roughly 10% in the wake of last week's vote in the United Kingdom to separate from the European Union. The second is that the nation's biggest bank by assets could soon gain approval from the Federal Reserve to boost its dividend -- though the actual increase may not occur until later in the year or even next year, as JPMorgan just raised its quarterly payout by 9%.

The net result is that JPMorgan Chase's stock yields 3.22%, which comfortably exceeds the average yield on the S&P 500 of 2.17%.

Whether JPMorgan Chase can raise its dividend further will be decided by the Federal Reserve in the comprehensive capital analysis and review -- the second step in the annual stress test process -- the results of which are scheduled to be announced on Wednesday.

As the Fed explained in a press release earlier this month (emphasis added):

CCAR is an annual exercise by the Federal Reserve to help assess whether large bank holding companies have forward-looking capital planning processes that account for their unique risks and are supported by the companies' risk-measurement and -management practices. As part of the CCAR, the Federal Reserve evaluates each firm's plans to make capital distributions, such as dividend payments, stock repurchases, as well as planned acquisitions.

This process has tripped up many of JPMorgan Chase's peers in the past. Last year, Bank of America had to resubmit its capital plan to "address certain weaknesses in its capital planning processes." And the year before that, the Fed objected to Citigroup's capital plans based on "qualitative concerns." It's no coincidence, in turn, that each of these banks has increased its quarterly payout only once since the financial crisis.

The same isn't true for JPMorgan Chase, which has boosted its payout annually over the past five years. And there's reason to believe that it will gain approval to do so again in this year's CCAR. 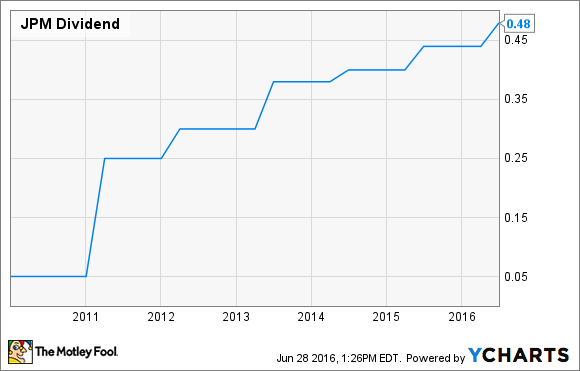 While it's true that JPMorgan Chase had to temper the proposed amount that it wanted to return to shareholders last year in order to meet its minimum capital requirements on a post-stress basis, it emerged from the first stage of this year's stress test with meaningfully higher capital ratios.

Its Tier 1 common capital ratio last year under the severely adverse economic scenario was 6.5%. This year it was 8.3%. Given this, it seems unlikely that JPMorgan Chase will run into a similar issue.

Consequently, while an actual dividend increase might not happen immediately, it seems reasonable to assume that the New York City-based bank will be given approval to raise the amount of capital that it returns to shareholders -- be it through a higher quarterly payout or a more generous stock buyback plan.