It's time to take a break from the Brexit news weighing on bank stocks and turn to something more positive: the likelihood that Wells Fargo (NYSE:WFC) will soon increase its quarterly dividend.

On Wednesday, the Federal Reserve is set to announce the results from this year's comprehensive capital analysis and review, the second step in the annual stress tests. While the purpose of the first step is to determine whether the nation's biggest banks have enough capital to survive a severe economic downturn, the second step gives the Fed the opportunity to approve or deny banks' plans to increase the amount of capital they return to shareholders over the next year.

Wells Fargo has done well on both components of the stress tests in the past, which has enabled it to boost its dividend annually since 2011. Its payout today, in fact, is bigger than it was before the financial crisis, which is nothing to shake a stick at when you consider that the nation's third biggest bank by assets slashed its quarterly dividend from $0.34 per share in 2008 down to $0.05 in 2009. It has since climbed to $0.38 per share. 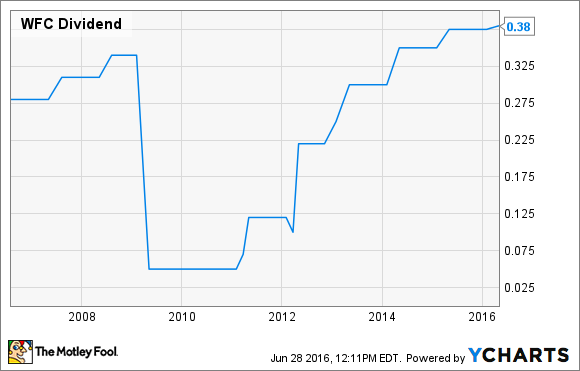 The one issue Wells Fargo could run into this year is that its dividend payout ratio, the percentage of net income allocated to dividends, has already passed the Fed's soft cap of 30%, above which the central bank more closely scrutinizes a bank's capital return proposal. Moreover, its payout ratio last year was 35.8%, which is beginning to approach the presumed hard cap at 40%.

At the same time, though, Wells Fargo was allowed to increase its dividend in 2015, even though its payout ratio in the prior year was 32.9%. This underscores the fact that the 30% threshold is indeed a soft cap.

Wells Fargo's performance on the first round of this year's stress test bolsters this case. It emerged from the hypothetical severely adverse economic scenario with a tier 1 common capital ratio of 7.2%. That's down from the 11.1% it entered the test with, but still comfortably above its 5.6% regulatory minimum. Based on its tier 1 common capital ratio, in turn, Wells Fargo has approximately $28 billion more capital than it needs to survive an economic downturn akin to the financial crisis.

The net result is that, assuming the Fed doesn't object to Wells Fargo's capital planning process -- that is, as opposed to the quantitative results -- there's every reason for shareholders to be confident that the California-based bank will once again gain approval to raise its dividend this year.