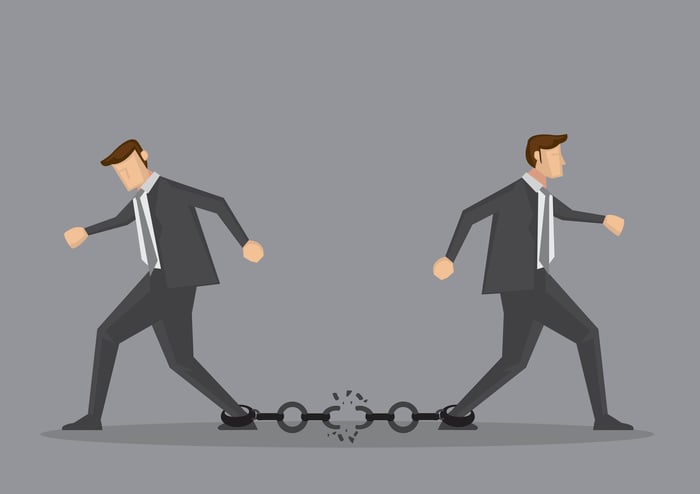 What: Shares of Hewlett-Packard Enterprise (NYSE:HPE) rose 14.3% in the first half of 2016, according to data from S&P Global Market Intelligence. By comparison, the consumer-oriented corporate sibling HP Inc. (NYSE:HPQ) and the S&P 500 market barometer both gained just 0.6% across the same period. What gives?

So what: For the most part, Hewlett-Packard Enterprise has been tracking alongside the broader markets and its co-managed cousin. Two events made all the difference.

First, the stock rose 13.5% in a single day on the strength of a great first-quarter report. Hewlett-Packard beat analyst estimates across the board, and CEO Meg Whitman explained that the company has more freedom to focus on its strengths under the new structure.

In mid-June, a bearish analyst added the finishing touch to Hewlett-Packard Enterprise's strong first half of 2016. Brean Capital analyst Ananda Baruah stuck to his modest hold rating on the stock, but noted that "there really could be something brewing here."

In particular, Baruah likes how Hewlett-Packard Enterprise has drawn up a solid multiyear plan that accounts for a quickly changing enterprise computing industry. HP hasn't shown that level of progressive focus in recent years, so maybe this split was exactly what the doctor ordered.

Now what: I'll agree that Hewlett-Packard Enterprise is off to a solid start. Next up, the trick is to keep that tight focus on high-quality growth. If that sounds like an easy task, let me remind you that Whitman still serves as chairman of HP Inc. In my view, both companies would be much better off if that top-level connection between them could be completely severed.

As it stands, Whitman is still juggling the two halves of old HP in an unhealthy way. It hasn't happened yet, but I'm waiting for one of the companies to fall short of expectations and then point fingers at the other business to explain the miss.

Whitman should simply let go of the HP Inc. side to focus exclusively on Hewlett-Packard Enterprise. Until that happens (which most likely will be never), I'll stay on the sidelines of both ex-HP stocks.