Please ensure Javascript is enabled for purposes of website accessibility
Log In Help Join The Motley Fool
Free Article Join Over 1 Million Premium Members And Get More In-Depth Stock Guidance and Research
By Timothy Green – Jun 29, 2016 at 6:26AM

The company's transition to the cloud isn't going fast enough, and its blockbuster acquisition of LinkedIn has some investors scratching their heads.

What: Shares of software juggernaut Microsoft (MSFT -0.72%) have slumped 13% year to date as of market close on June 27, according to data provided by S&P Global Market Intelligence. A weak quarterly report in April that showcased the bumpiness of Microsoft's cloud transition is partially to blame, as is Microsoft's plan to acquire LinkedIn (LNKD.DL).

So what: Microsoft stock entered 2016 at its highest level since the dot-com bubble more than 15 years ago, so the stock is still up substantially over the past few years. 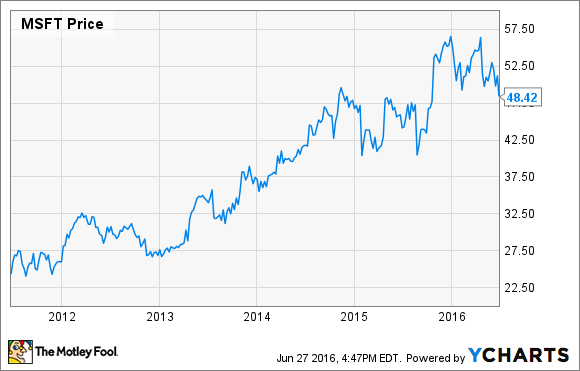 Microsoft remains heavily dependent on sales of Windows and Office, but the company has been shifting its business to the cloud in recent years. Office is now sold as a subscription service called Office 365, and Azure, Microsoft's cloud-computing platform, has been growing at a blistering pace.

This transition isn't happening fast enough for investors. Microsoft missed analyst estimates for earnings and posted a year-over-year decline in revenue for its fiscal third-quarter, with rapid growth of the cloud business unable to make up for weakness elsewhere. Windows OEM revenue fell 2% adjusted for currency, and Microsoft's struggling phone business suffered a 46% sales decline. GAAP EPS tumbled 23% year over year, while adjusted EPS was flat.

In addition to Microsoft's middling results, the company's announcement in June that it planned to acquire professional social network LinkedIn for $26.2 billion sent the stock lower. LinkedIn will be the largest acquisition in Microsoft's history by far, and while the move makes strategic sense, LinkedIn's willingness to sell itself for quite a bit less than its 52-week high suggests that Microsoft may have substantially overpaid for the company.

Now what: Microsoft has been fairly aggressive moving its business toward cloud-based products, but investors are becoming impatient. Microsoft Chairman of the Board John Thompson has become impatient as well, telling Bloomberg that he wants the company to move much faster.

Microsoft still generates a massive amount of profit, and its balance sheet is overflowing with cash. But the company has been disrupted by both the cloud and mobile devices, and catching up in both areas has been a slow process. So far in 2016, investors have become less optimistic that Microsoft can pull it off.

Timothy Green has no position in any stocks mentioned. The Motley Fool owns shares of LinkedIn and Microsoft. Try any of our Foolish newsletter services free for 30 days. We Fools may not all hold the same opinions, but we all believe that considering a diverse range of insights makes us better investors. The Motley Fool has a disclosure policy.