After falling more than 25% in the past three months, Alaska Air stock is a compelling bargain.

A few months ago, Alaska Air (ALK -1.69%) CEO Brad Tilden set out a vision for turning his company into the premier airline for travelers on the West Coast by buying smaller rival Virgin America (VA). Yet since the merger was announced, Alaska Air shares have lost more than a quarter of their value. 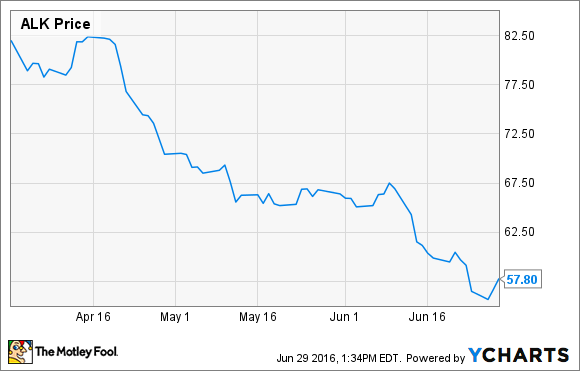 To some extent, this reflects sticker shock after Alaska agreed to pay $2.6 billion for Virgin America: nearly double the latter's value before the merger rumors heated up. Alaska has also faced a tough competitive environment in its hometown of Seattle recently, due to Delta Air Lines' (DAL -0.85%) efforts to build a hub there.

Unit revenue is on the decline

As has been the case for many other airlines, Alaska Air has reported significant unit revenue declines over the past year and a half. Revenue per available seat mile (RASM) fell 6.1% year over year in Q1, and Alaska has reported 6.5% RASM declines for both April and May.

Some of this unit revenue weakness stems from the overall weak fare environment. However, Alaska Air has also been negatively impacted by its own rapid growth: It has been increasing capacity at a double-digit rate lately.

But unit costs are falling, too

Additionally, Alaska Airlines has dramatically improved its fuel efficiency over the past decade, producing a 25% cumulative improvement since 2004. By the end of 2017, it plans to replace its remaining old 737-400s with new 737-900ERs that have nearly 25% more seats but burn the same amount of fuel.

Thanks to Alaska Air's ongoing unit cost reduction efforts -- plus the benefit of lower fuel prices -- analysts expect the company to post double-digit earnings-per-share growth this year despite its unit revenue declines.

Another key point in favor of Alaska Air is that its unit revenue is likely to stabilize soon. First, after more than a year of double-digit capacity growth, the company's own expansion will slow to a mid-single digit rate by the fall.

Second, Delta Air Lines' explosive growth in Seattle is likely to moderate soon. A couple of years ago, Delta set a goal of growing its Seattle footprint to more than 150 daily departures by 2017. It has already reached this target, with an estimated 152 peak day departures in Seattle this summer. Even if Delta wants to grow further in Seattle, airport facility constraints will force it to do so at a more modest pace.

Third, non-ticket revenue growth will support Alaska Air's unit revenue going forward. Most notably, the carrier will deploy a new premium economy class on most of its aircraft, beginning this fall. By the time the new Premium Class is fully rolled out in 2018, it is expected to contribute $85 million in incremental annual operating profit.

The merger will boost EPS from day one

Finally, the Virgin America merger will be accretive from day one, excluding integration costs. Analysts currently expect Virgin America to earn about $160 million this year. Even after including financing costs, acquiring these profits should add more than $100 million to Alaska's bottom line, boosting EPS by more than 10%.

Longer-term, Alaska Air expects the Virgin America merger to produce annual synergies of $225 million: $175 million on the revenue side and $50 million on the cost side. This will provide a substantial boost to its earnings -- or help offset other revenue and cost pressures.

To be sure, Alaska Air faces risks related to the revenue environment and its merger integration activities. However, it is likely to post strong earnings growth over the next several years based on its numerous opportunities to continue reducing unit costs while stabilizing and then growing unit revenue.

Nevertheless, Alaska Air stock trades for just eight times the company's projected 2016 EPS: not including the earnings benefit from buying Virgin America. That makes this a unique opportunity to buy Alaska Air stock -- which is just what I did earlier this month.

Adam Levine-Weinberg owns shares of Alaska Air Group and is long January 2017 $40 calls on Delta Air Lines. The Motley Fool recommends Virgin America. We Fools may not all hold the same opinions, but we all believe that considering a diverse range of insights makes us better investors. The Motley Fool has a disclosure policy.