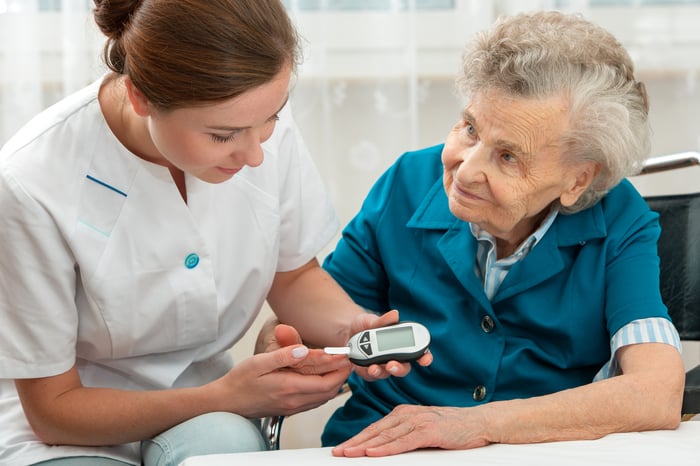 With annualized sales approaching $2.8 billion, Novo Nordisk's (NYSE:NVO)Victoza is already a top-selling diabetes drug, but Victoza sales could be about to head even higher. Earlier this month, management released data showing that Victoza can reduce the risk of cardiovascular-related death in diabetes patients. If those study results lead to doctors using Victoza earlier in patient treatment, Victoza revenue could eclipse $3 billion soon.

Over 415 million people have diabetes worldwide and 640 million people will have the disease in 2040. Sadly, those figures suggest that the number of diabetes-related deaths could soar from the already disheartening 5 million deaths per year.

The reason why so many diabetics pass away because of cardiovascular disease is that hyperglycemia, or excess sugar in the bloodstream, can cause arterial blockages, blood clots, and increase blood pressure. All of those things can lead to heart attack and stroke.

Historically, medicine prescribed to treat diabetes boosts insulin levels to control blood sugar levels, but those medicines have failed to reduce the rate of cardiovascular events or death. Insulin is necessary to convert sugar into energy, but the pancreas doesn't produce enough insulin, or the insulin that is produced isn't used by the body properly, in diabetes patients.

However, that could be changing as medicines including GLP-1 agonists, such as Novo Nordisk's Victoza, are becoming available. GLP-1 gets created in response to the eating of proteins, carbohydrates, and fats, and it is a powerful stimulant of insulin production. However, GLP-1 gets broken down by the enzyme DPP-4 within minutes of its creation, making its benefit to diabetes patients short-lived.

Fortunately, researchers developed a way of creating GLP-1 that is resistant to DPP-4 and as a result, these GLP-agonists can be used to prolong GLP-1's impact on insulin production.

While there are multiple GLP-1 agonists now available, Novo Nordisk's is the most successful of them. Last quarter, Victoza sales of $678 million put it on pace for roughly $2.8 billion in revenue this year.

When diabetes drugs are approved by the FDA, the regulator requires cardiovascular outcomes studies get conducted to make sure that they don't increase cardiovascular risk.

In the case of Victoza, that requirement resulted in studies showing that Victoza doesn't increase cardiovascular risk of death, but actually reduces it.

Significantly reducing cardiovascular death while also reducing non-fatal cardiovascular events is especially important because no other GLP-1 drug has demonstrated that ability.

Victoza is a top-seller, but it's lost a little market share in the past year to Eli Lilly's Trulicity, another GLP-1 agonist that launched recently. Last quarter, Trulicity's sales skyrocketed to $143.6 million from $18.3 million in Q1, 2015.

Victoza's positive cardiovascular data could put the brakes on Trulicity's trajectory. Additionally, the findings could lead to doctors prescribing Victoza earlier in the course of diabetes treatment. If that proves to be the case, then Victoza peak sales could be on their way to $4 billion someday.