Please ensure Javascript is enabled for purposes of website accessibility
Log In Help Join The Motley Fool
Free Article Join Over 1 Million Premium Members And Get More In-Depth Stock Guidance and Research
By Brian Feroldi - Jun 30, 2016 at 9:05AM

Shares are off to a great start to the year. Here's a recap of the key developments that have caused the stock to jump this much.

What: Shareholders of Organovo Holdings (ONVO 5.46%), a 3-D bioprinting technology company, are having a great 2016. The company's stock is up more than 27% since the start of the year, according to data from S&P Global Market Intelligence. 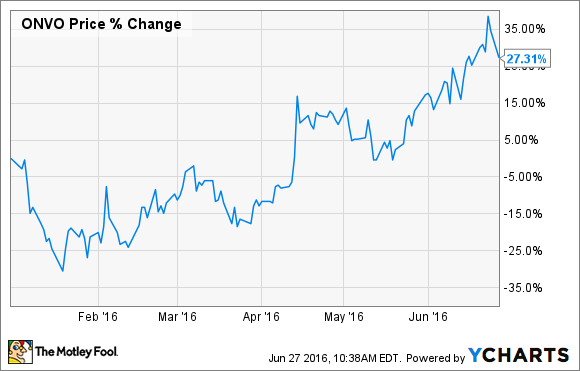 So what: Organovo Holdings has been busy over the past six months. Here's a recap of the key developments that have occurred so far this year:

Overall, Organovo has had a productive start to the year, so it's understandable why the markets have bid up shares. As shareholders surely remember, shares plunged 66% in 2015, so any positive news was bound to help the company's stock start to rebound.

Now what: Organovo now counts five of the top 25 largest drugmakers in the world as customers, showing that it's making solid progress in gaining the attention of industry giants. This list includes Merck, Astellas Pharma, Bristol-Myers Squibb, and more, so it's possible that the company's entry into the space has reached a tipping point.

Looking ahead, management believes revenue will land between $4 million and $6 million in fiscal 2017, which represents strong growth from the $1.5 million in revenue that Organovo generated in fiscal 2016. However, that's still nowhere near enough sales to offset the company's growing expenses, so cash burn is expected to be at least $32.5 million for the year. That will certainly take a big bite out of the company's cash balance of just over $62 million.

The company is on track to launch its kidney tissue product in the third quarter of this year, which could be a great catalyst for investors to look forward to. Management believes the kidney tissue market could exceed $1 billion in time, so investors will want to watch this launch closely.

Still, Organovo is likely to remain in the red for at least a few more years, so while its business model is intriguing, I personally have no interest in becoming a shareholder. If the company proves that it can generate a profit, then I'd happily change my tune, but until that happens, I'm content to remain on the sidelines.