Positive clinical news is being overshadowed by an unfavorable court ruling and slowing growth of its core business.

What: 2016 has been rough on shareholders of Regeneron Pharmaceuticals (REGN -1.26%). The company's stock has surrendered more than 35% of its value since the start of the year, according to data from S&P Global Market Intelligence. 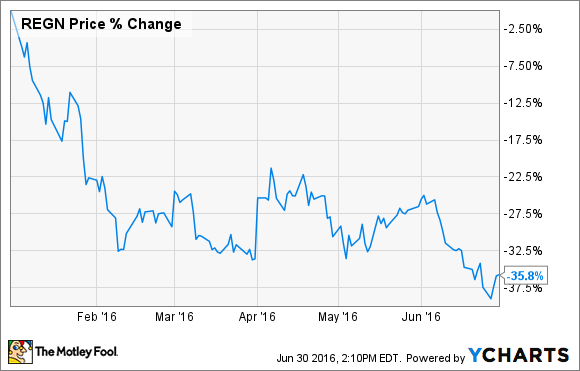 So what: The year so far has been full of both positive and negative developments that pushed the company's shares in one direction or the other. Here's a recap of the year's top headlines:

On a clinical basis, the company is having a great year, but traders are far more focused on three recent negative developments:

Add in the fact that the company's shares have historically traded for a premium price, and it's not hard to understand why shares have cratered so far this year.

Now what: Biotech stocks in general have been sold off hard since the start of the year, so perhaps it's not surprising to see that Regeneron's shares have struggled. Despite the weakness, I think there are plenty of reasons to be bullish on the stock from here.

For one, Regeneron's management team has a history of under-promising and over-delivering, so it's possible they're being conservative with Eylea sales guidance. In addition, cardiovascular outcomes data will be available for Praluent in the next few quarters, which could help spur demand. In addition, Sarilumab and Dupilumab both look as if they'll be winners, and both could be on the market by the end of 2017.

That's a lot of potential growth for a company trading for about 21 times next year's estimated earnings. Investors with a long-term time horizon might want to consider picking up a few shares while the market remains skeptical of its chances of success.

The Motley Fool owns shares of Regeneron Pharmaceuticals. We Fools may not all hold the same opinions, but we all believe that considering a diverse range of insights makes us better investors. The Motley Fool has a disclosure policy.