Our three lifters from last week are a top-level supermarket chain operator, a big utility, and a publishing house of long standing.

June has come to a close, meaning we're a few days from the start of the next earnings season. As if to warm up for a new batch of dividend raises (which often coincide with earnings releases), several notable companies have beefed up their distributions. 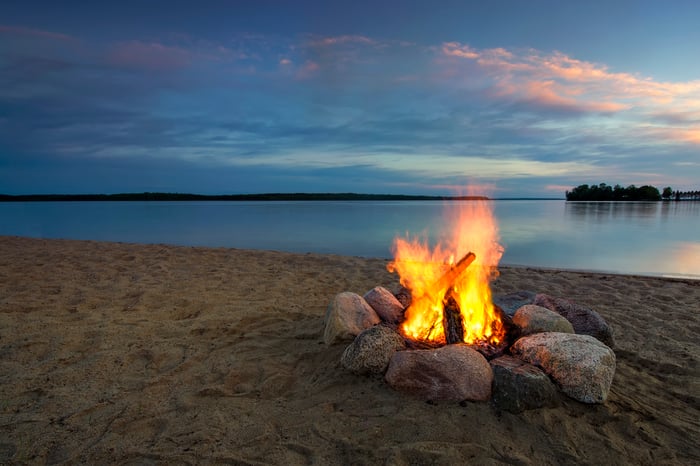 Our selected trio for this edition is:

Well, this is a nice item to find in a shopping cart. Supermarket chain operator Kroger (KR -1.65%) has declared a quarterly dividend of $0.12 per share, an improvement of 14% over its predecessor.

That payout has crept up incrementally over the past decade or so, and there's little reason it shouldn't. The company is consistently profitable and keeps growing its revenue and same-store sales (an important metric for retailers). Growth in the latter has slowed recently, but not to the point where investors should be overly concerned. 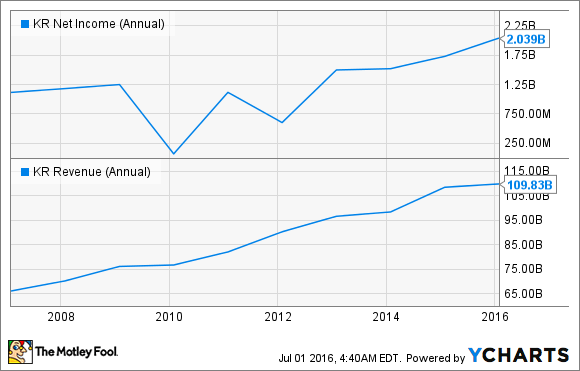 The company also manages to improve its operating cash flow, which has risen notably over the past few years to over $4.8 billion for fiscal 2015. That leaves plenty of scratch not only for the dividend, but also for the current $500 million iteration of its share repurchase program.

Kroger, in other words, is doing well and its finances are in good shape; no one should worry about the viability of the new dividend.

That payout will be dispensed on Sept. 1 to stockholders of record as of Aug. 15. At the most recent closing stock price, it would yield 1.3%; by comparison, the present average of dividend-paying stocks on the S&P 500 is just shy of 2.1%.

By and large, utility stocks that pay dividends are fairly predictable regarding their payouts. So it is with big Michigan operator DTE Energy (DTE -2.91%), which in line with a habit in force since the beginning of this decade, has lifted its quarterly distribution for the seventh year in a row. Said payout will rise by 5% to $0.77 per share. 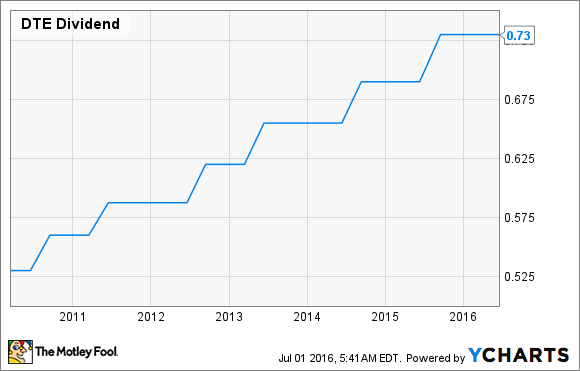 The company is a well-run utility despite its size and sprawl. It operates in 21 states besides Michigan, and has not only gas and electric assets, but is also active in pipelines, storage, and renewable energy. That means a lot of revenue sources, so not surprisingly annual top line has grown over the years to exceed $10 billion.

DTE Energy produces plenty of operating cash flow (typically around the $2 billion mark), although it habitually spends most of this on plant and equipment expenditures. This doesn't leave much for the dividend, a likely reason for the fairly conservative raise.

Still, it seems the payout is important to the company, so I'd imagine it'll keep finding a way to add to it every year. I wouldn't necessarily count on that lasting forever, though.

DTE Energy will hand out its freshly raised distribution on Oct. 15 to holders of record as of Sept. 19. It would yield 3.1% on the current stock price.

Sturdy academics-focused publisher John Wiley & Sons (JW.A -2.55%) (JW.B) is utility-like in its raising predictability. With its latest quarterly dividend hike -- by 3% to $0.31 -- it's now lifted said payout once annually for 23 years in a row, giving it almost Dividend Aristocrat status (the minimum is considered to be 25).

We'll see if it can go the distance. The company's Q4 and fiscal 2016 saw declines, particularly in per-share earnings -- for both periods, adjusted EPS declined by 17% on a year-over-year basis, on revenue that dropped by 2% for the quarter, and 5% on the year. 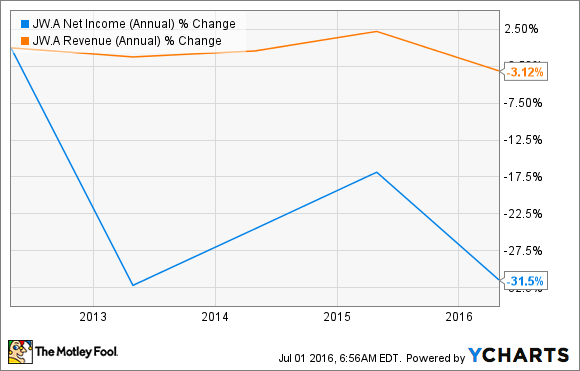 Going forward, fiscal 2017 EPS is projected to be flat from the preceding year, while top line should inch higher by a low single-digit percentage. A dynamic growth story, this isn't.

Yet Wiley does a good job generating cash, with robust free cash flow that more than covers the company's dividend payout. Considering that, it can probably become an Aristocrat when its time comes, although I'd keep a concerned eye on those growth rates -- or lack thereof.

Wiley's upcoming dividend is to be paid to shareholders of both the A and B classes of the company's stock on July 20, to investors of record as of July 6. As the stock prices of the two are very close, the yield for both would be roughly 2.4%.

Eric Volkman has no position in any stocks mentioned, and neither does The Motley Fool. Try any of our Foolish newsletter services free for 30 days. We Fools may not all hold the same opinions, but we all believe that considering a diverse range of insights makes us better investors. The Motley Fool has a disclosure policy.