An orderly and lucrative sale of the company's former infrastructure division helped both stocks crush the market last month. What's next?

So what: Windstream's biggest value driver in June came from the orderly sale of its remaining CS&L holdings.

First, Windstream made a deal with its debt holders to exchange 14.7 million CS&L shares for loan reductions. Performing this transaction on the open market would have amounted to more than a week's worth of average CS&L trading volume, which could have driven share prices through the floorboards. The lender-to-borrower deal structure avoided such issues.

Just a few days later, Windstream walked back to its lenders to hand over the rest of its CS&L shares. The effective sale price per share was about 18% higher this time, since CS&L shares had been rising organically.

These transactions reduced Windstream's ownership of CS&L from 20% to zero, and also sliced the company's estimated interest payments in 2016 from $385 million to $370 million. That's a significant bottom-line boost for a company with negative earnings and roughly breakeven free cash flows. 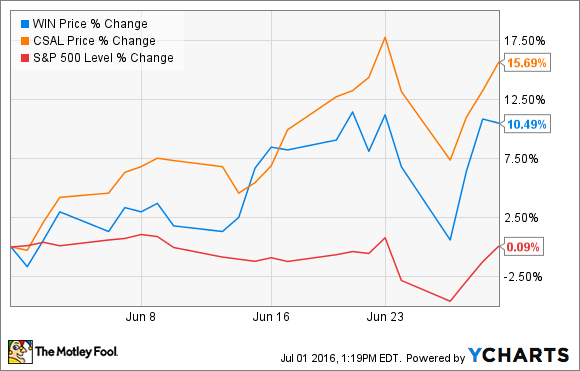 Now what: Windstream shares have now gained an impressive 42% year to date while CS&L investors like yours truly have enjoyed a 55% paper gain.

On top of that, Windstream offers an effective dividend yield of 6.6% at today's share prices and CS&L's yield stands at 8.3%. The two stocks were severely -- and in my opinion, unfairly -- punished after their separation. The gains in the rearview mirror today only represent a return to the total pre-split value of the two companies.

I'm still waiting for CS&L to start finding significant clients not named Windstream, which would unlock a whole new growth angle in that stock. Meanwhile, Windstream is free to sell an increasingly business-to-business package of local and long-haul data services. I like what's going on under both of these banners.

Anders Bylund owns shares of Communications Sales and Leasing. The Motley Fool has no position in any of the stocks mentioned.