Sometimes, it's the decision not to invest in something that is more important.

Most investors spend a great deal of time looking for stocks to buy. We easily get sucked in by good stories and often overlook the risks hidden within the stories -- or simply ignore obvious risks because the story seems so good. That's why there are times when saying "no" to investments is so important, even if the upside could be huge. On that score, United States Steel (X 1.56%) and Kinder Morgan (KMI -2.11%) are two stocks I'd hate to buy.

U.S. Steel has a storied history and still holds a prominent place in the global steel industry. That said, the industry has been on the outs since the 2007 to 2009 recession, facing falling steel prices and a global oversupply that's led to a surge in low-cost imports into the U.S. market. It's been tough going for U.S. Steel, whose shares are off some 90% since hitting a peak in 2008. But that's part of the reason to consider buying the stock -- it has turnaround potential.

The company has been busy streamlining its business to better position itself for today's steel market. While that's led to some big one-time charges and red ink in six of the last seven years, the company is slowly improving its industry and financial position.

For example, in addition to shutting down high-cost mills, U.S. Steel's net debt has moved lower in each of the last four years and ended 2015 about 20% lower than in 2012. Liquidity, meanwhile, has held fairly constant; notably, cash on the balance sheet is roughly at the same level as it was in 2012. While its blast furnace-heavy business has higher costs than some of its rivals that use more nimble electric arc furnaces, its mills could quickly turn profitable with higher steel prices. 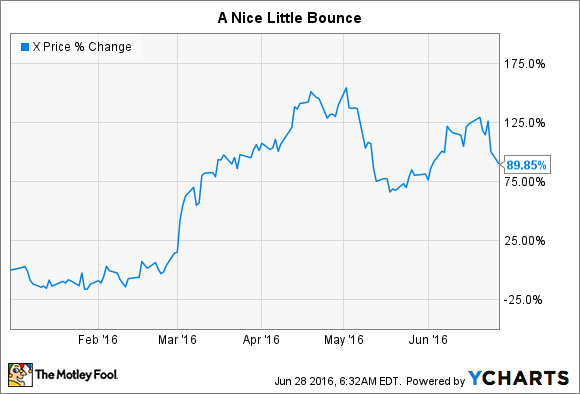 But here's the wrinkle. U.S. Steel is still a struggling company, and all the restructuring and red ink prove that out. Moreover, it still has a lot of long-term debt, which makes up around 60% of the capital structure. To give a quick comparison, electric arc furnace-focused Nucor (NUE 1.71%) has only posted a full-year loss in one year out of the last seven (it's been in the black in each of the last six years), and long-term debt is at about 36% of the capital structure. The company has shown much more resilience in the face of adversity than U.S. Steel.

Nucor's stock doesn't have the same turnaround appeal as beaten-down U.S. Steel; however, if the steel industry remains troubled -- a very real possibility -- which company would you rather own? I'd rather own Nucor, the more resilient steel maker.

I owned Kinder Morgan at one point in time, selling my shares well before the company cut its dividend because I felt valuations had become stretched. That was a lucky call, since the shares have been cut in half since the start of 2015. A big reason for that was the dividend cut.

Kinder Morgan is one of the country's largest oil and natural gas midstream companies, owning the pipes, terminals, and storage facilities that help get these fuels from where they are found to where they are used. It's largely a toll-taker model in which Kinder gets paid a fee for the use of its assets. With the oil downturn, investors have become increasingly concerned about the sector. For the most part, though, it's a reliable cash generator. As long as we use oil and natural gas, Kinder's assets retain a huge amount of value. 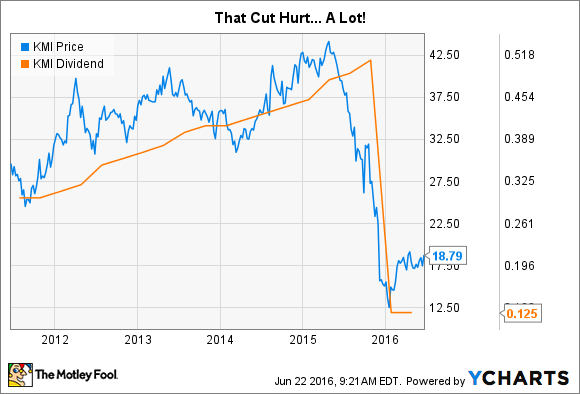 The problem for Kinder revolves around growth. It costs a lot of money and takes a lot of time to build midstream assets, with big upfront costs showing up well before assets start producing income. Acquisitions, meanwhile, can bring in revenues right away, but they still cost a lot to get done. At one point, Kinder was pushing a huge amount of its cash flow out to investors in the form of dividends, leaving little around for growth, so Kinder used debt and equity sales pretty much exclusively to fund expansion efforts.

To put some perspective on the issue, Moody's downgraded the company's outlook to negative after it agreed to up its stake in Natural Gas Pipeline Company of America LLC for approximately $136 million in late 2015, taking its ownership from 20% to 50%. According to the credit rating agency, "The negative outlook reflects Kinder Morgan's increased business risk profile and additional pressure on its already high leverage that will result from its agreement to increase ownership in NGPL, a distressed company." The big fear was that Kinder Morgan would have to make good on some of Natural Gas Pipeline's debts as well as take on more to its already rather high debt load.

With a huge pipeline worth of growth projects and a languishing stock price, equity sales weren't a great option anymore, and only so much debt can be added to a balance sheet (long-term debt stands at about half the capital structure) before industry watchers like Moody's start to get nervous. The answer was to cut the dividend  It was the right call for the company to make since it freed up capital to spend on growth. Moody's announcement, to add additional context, came out just a few days before the dividend cut.

But I'm an investor and I have to trust that management will do the right thing for the company and, equally important, the right thing for me. It's a balancing act to be sure. My problem with Kinder is that it was talking about the importance of the dividend and even the potential for dividend growth until just a few weeks before the dividend took a nearly 75% haircut. Kinder's assets are great, and it really is a well-run company, but any income investor who took management's word on the dividend got burned. There's definitely recovery potential at Kinder -- and even growth potential -- but I'll let someone else make the money here. I'm just not as trusting as I used to be.

What you don't do

Investing is a hard business, made extra difficult by the nature of the human mind. That's why you have to step back and question every story and feel that you can trust management to come through on its word. U.S. Steel and Kinder Morgan are both interesting investment ideas, but I would hate to buy either because they just don't hold up to my increasingly stringent standards.