Risk is one of those words that get thrown around a lot in the world of investing, but so few investors sit down and try to understand what the most important risks are for them. As a long-term investor, chances are volatility isn't as important a risk factor for you. One risk that should be high on your list is inflation. After all, if your investment can't beat the slow creep of inflation, then it's losing you money.

So we asked three of our contributors to highlight one stock they think is a relatively safe bet for beating inflation over the long haul. Here's what they had to say.

Why try to beat inflation when you can join it with Brookfield Asset Management?

Matt DiLallo: The easy way to beat inflation is to invest in assets that already have built-in inflation escalators. Few are better at doing that than Brookfield Asset Management (NYSE:BAM). The company's focus is on owning real assets such as real estate, infrastructure, and power-generation stations, whose value tends to rise with inflation. Further, the bulk of the cash flow generated by these assets is secured by contracts that often contain inflation escalators.

Not only does Brookfield Asset Management have inflation covered, but it is poised to beat it comfortably. The company's revenue has several additional escalators, including those linked to GDP growth, occupancy increases, and redevelopment gains. Further, the company has a diverse set of organic growth projects across its portfolio as well as a history of accretive mergers and acquisitions to drive incremental earnings growth. Needless to say, Brookfield Asset Management is well positioned to outpace inflation in the years to come.

Dan Caplinger: The best way to beat inflation is to find a stock that has the pricing power to pass on any cost increases to its consumers. Athletic shoe and apparel giant Nike (NYSE:NKE) has the clout within the industry to do exactly that, and it is already able to sell its products at a huge premium to their cost. Over the past year, Nike has brought in $32.4 billion in revenue, but it spent only $17.4 billion on the cost of goods sold, which includes the materials and labor necessary to manufacture its apparel and shoe products. Nike's 46% gross margin is a primary contributor to its financial success, and it demonstrates the extent to which its brand loyalty overcomes the upward march of inflation over time.

Moreover, Nike's brand strength continues to solidify worldwide. In late June, Nike reported record annual sales of $32.4 billion, which grew 6% from the previous year's revenue. Earnings per share grew at an even faster 17% pace, even though higher overhead expenses and strong currency headwinds kept the company's bottom line from climbing even faster. As it keeps following its business model of latching onto superstar athletes and getting key endorsements for its products, Nike is staying ahead of its smaller competitors and demonstrating its ability to overcome inflation and become even more profitable over time.

Tyler Crowe: I'm in the same boat as Matt in this case. If losing to inflation is a major concern, then why not invest in a business that gets to constantly up its prices because of inflation? A large portion of Magellan Midstream Partners' (NYSE:MMP) refined-petroleum product pipeline network serves places that are considered to have a lack of competition by the Federal Energy Regulatory Commission. So, much like a regulated utility, the fees it charges are regulated and revised annually. Much of that fee change has to do with generating a fixed return on investment, and the number is always adjusted for inflation.

This kind of fee structure has been quite valuable for Magellan as it has provided it with very consistent streams of growing profits over the years. Those profits have been returned to shareholders in the form of a distribution that has grown at a 13% rate annually. That sort of distribution growth is well above anything inflation can throw at you, and it has generated very strong total returns over the past decade. 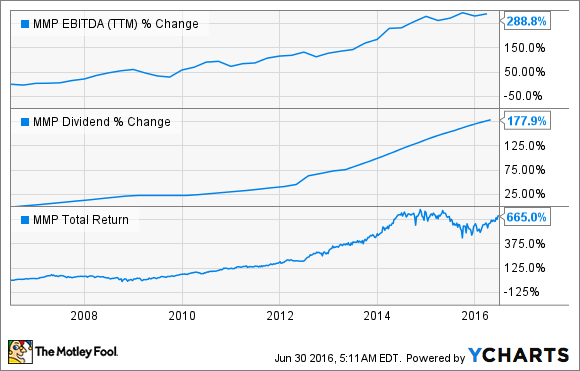 Magellan's management has been keen to grow its business while keeping a much more conservative balance sheet than many of its pipeline and master limited partnership peers. If it continues to do so, its stock should more than likely be able to continue to outpace inflation for its investors.