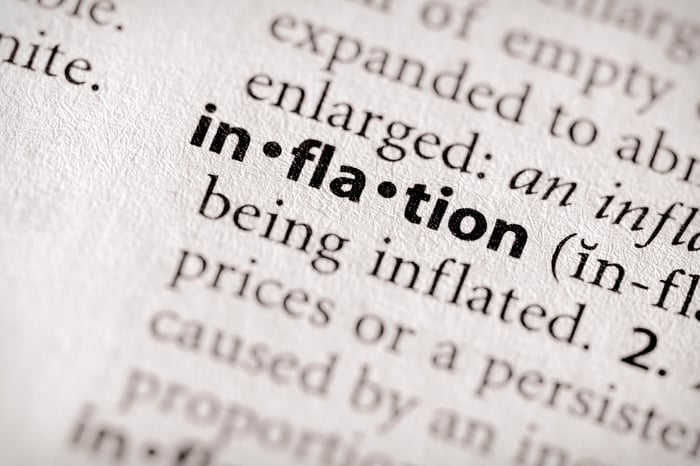 Inflation hasn't been much of a problem for investors lately, but low unemployment could signal that inflation will begin rearing its ugly head, and if it does, investors will want to have a plan in place. We asked some of our top Motley Fool's top contributors to offer up stocks they'll be buying if inflation accelerates, and they think any inflation-beating plan ought to include owning these three companies.

Read on to see if these inflation-beaters are right for your portfolio.

How you can outrun inflation

Dan Caplinger: The best investments to beat inflation are in companies that have the pricing power to pass on any increases in their cost structure on to consumers. That requires having a strong brand, and athletic shoe and apparel maker Nike (NYSE:NKE) has built up a global empire with one of the top 20 most valuable brands in the world, according to the latest rankings from Interbrand. Nike routinely sports gross margin figures in the 40% to 50% range, taking full advantage of its premium reputation to bring in more revenue from its customers.

With production costs that are just a fraction of what it actually charges consumers, Nike can actually turn inflation into a profit opportunity. If a company can manufacture something for $25 that it sells for $100, and inflation increases its costs by 10%, then it will have to bear an additional $2.50 per unit in costs. However, a 10% increase in its retail price to reflect inflation would boost total revenue by $10 per unit, resulting in an addition $7.50 per unit in potential profit.

In reality, few companies aim to profit from inflation. For Nike, though, this protection from the impact of inflation can help it maintain its profit levels while retaining its reputation as the premier manufacturer of sports apparel and footwear in the market.

A rebound in grains could spark shares

Todd Campbell: If you're looking to own stocks that can benefit from inflation, you might want to consider picking up shares in agriculture machinery giant Deere & Co (NYSE:DE).

Demand for Deere's equipment has fallen as agriculture prices have languished, and as a result, the company's earnings per share have fallen 16% through the first nine months of its fiscal 2016. 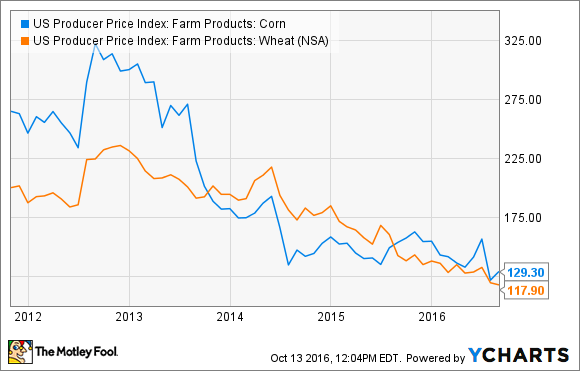 However, that could change if grains prices perk up, farmer income rebounds, and farmers begin investing in equipment again.

Admittedly, there's not much evidence of that happening (yet). Grain prices remain at multiyear lows, and farm income this year is expected to be the lowest since 2009. But that doesn't mean better times aren't around the corner for farmers. After all, a larger and wealthier global population provides significant long-term tailwinds for crops.

Despite the run-up in shares, though, there could still be plenty more upside ahead, especially since cost-cutting moves during these lean times should make the company more profitable when inflation causes demand to perk up.

Jamal Carnette: Numerous studies show that stock prices are positively correlated with inflation, which is a fancy way of saying if one goes up, so does the other. However, not all stocks are created equally in this regard. The companies best suited for an inflationary environment are those who are able to raise the prices of their products and services but control their input costs, including labor and raw materials. ExxonMobil (NYSE:XOM) would be a stock to outperform in an inflationary environment.

The key driver of ExxonMobil's revenue is the price of oil and gas, inflation-sensitive commodities. Unfortunately for the company, the dis-inflationary environment has really put a drag on returns this year. Since 2004, the price of crude oil has fallen from $100 per barrel to its current value of $50. Throughout the first six months of 2016, the company reported a year-over-year revenue decrease of 25% and a EPS drop of 62%.

During this period, the company has committed to paying the dividend, even increasing the payout 2.7% over last year's total, and it has committed to cutting non-essential costs. As a result of the stock's recent slide and dividend increases, the company currently yields 3.4%, a rate 90 basis points above the current 30-year Treasury. In the event inflation and economic activity increase, ExxonMobil will be positioned to reward investors.