Here's a look into the auto industry's sales, the future of self-driving, and a deal that could make the world's largest candy company.

After the entire world huffed and puffed about the U.K.'s decision to bail on the European Union, investors were able to shake off concerns, as the U.S. markets climbed higher Friday. This marked the fourth straight day of gains. The S&P 500 (^GSPC -0.09%) and Dow Jones industrial Average (^DJI -0.56%) rose 3.2% and 3.1%, respectively, for the week.

Part of the optimism was from better-than-expected manufacturing data. More specifically, U.S. manufacturers grew in June at the fastest rate in 15 months, according to the Institute for Supply Management. The ISM's manufacturing index jumped to 53.2% in June, up from a 51.3% reading in May. Anything above 50% indicates more companies are growing instead of shrinking.

Beyond economic data, there were some stocks making big headlines or big moves this week.

Speaking of consumers brushing off the Brexit concerns, that's precisely what happened in the automotive industry according to Ford Motor Company (F 1.29%). Management noted on the company's sales conference call that the month was average until after the Brexit vote. Then, perhaps surprisingly, the sales month ended on a strong note.

Ford wasn't the only automaker posting a strong June sales result, as Nissan, Fiat Chrysler Automobiles, Hyundai-Kia, and Honda all posted increases in sales. On the flip side, General Motors' sales declined 1.6%, thanks to the company's focus on slashing its daily rental-fleet sales.

All in all, expectations were for the industry's sales to rise about 5%, so investors were a bit disappointed with roughly half that growth. June's sales figures increased 2.4%, to just over 1.5 million units. As sales of highly profitable SUVs and full-size trucks continue to dominate the market, investors can expect Detroit autos to post another very-profitable second quarter.

Shareholders of The Hershey Company (HSY -1.40%) received a nice boost this week when the stock price jumped roughly 21% after news that Mondelez (MDLZ 0.71%) offered $107 per share. Hershey's stock held most of those gains despite the offer being rebuffed, which means investors are fairly confident a better deal could be struck. 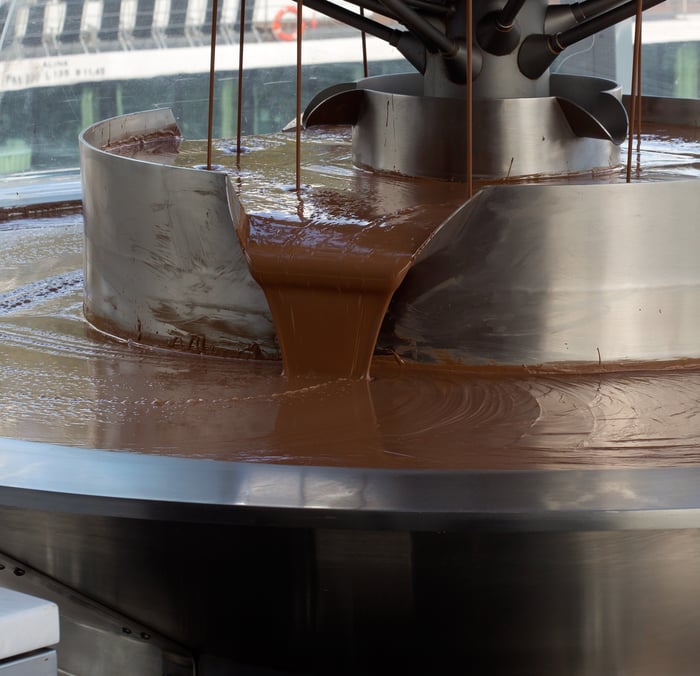 It's a deal that makes sense operationally, and Hershey would be a nice addition to a company that already owns brands such as Oreo, Cadbury, and Trident, but lacks a strong brand in the chocolate segment. For Hershey, the company would benefit from using Mondelez's geographic network, as well as the cost synergies of combining the two companies. The combination of the two companies would create the world's largest candy company.

While the deal makes sense operationally, there is a hurdle to jump. That hurdle is the fact that Hershey is a controlled company, with more than 80% of the voting power owned by Milton Hershey School Trust. The trust depends on Hershey's dividends to fund its operations, and it was established to help children from low-income families. What's best for the trust may not be best for Hershey's shareholders.

Mondelez is going back to the drawing board, but it's possible investors will see a new offer in the ball park of between $115 and $120 per share, which, at the top-end of that range, values the company at about $30 billion. But whether or not that will be enough to win the trust's approval is another story.

It might sound like science fiction, but the automotive industry is hurling itself toward the future of autonomous cars. Shares of Mobileye (MBLY) soared on Thursday after Bloomberg reported that the company has officially teamed up with Intel and BMW to develop a self-driving car. Not only that, but the partnership plans to ship the vehicle by 2021.

While BMW and Intel are household names, Mobileye has quietly become a major player in the self-driving vehicle game, thanks to its camera-sensor products. The coalition with Intel and Mobileye is "the next core building block to bring fully automated driving technology to the street," BMW Chief Executive Officer Harald Krueger said in a statement.

The technology developed will be used in the iNext, which is planned to supplant the 7-Series sedan as BMW's flagship model, and become the basis for fleets of fully autonomous vehicles. While the industry's push toward self-driving cars is exciting, a fatal accident involving a Tesla driving on the vehicle's Autopilot feature serves as a somber reminder that these technologies may not be ready for the real world just yet.