These dividend aristocrats are the best of the best for creating a long term income- and growth-generating portfolio.

Dividend aristocrats are stocks that have increased their dividend pay-outs at least once annually for 25 years or more and thus, inevitably, attract income-seeking investors. All the more attractive are the dividend aristocrats that not only offer high-yield payouts but promising future growth. Mountains of evidence proves that dividend paying stocks beat the S&P 500 and companies that manage this while also offering strong growth prospects are the icing on the cake. With this in mind, let's take a look at some of the top dividend paying stocks to buy now.

Energy and financial stocks were omitted from the list because their earnings are likely to move in step with energy prices and the state of the global financial system. As we've seen in recent years, both are subject to a lot of volatility.

Similarly, businesses that are undergoing significant restructuring have been culled from the list in favor of more stable ones. Finally, since diversification is important for those looking to construct a portfolio of stocks, two stocks from each of the sectors covered have been selected.

For those who are focused on current dividends and income, the table below shows the 10 stocks selected with dividend yields and payout ratios. The latter is simply dividend divided by earnings and is a useful indicator of a company's potential to increase its dividend--a lower number is better.

That said, it's also a good idea to try and measure how consistently a company tends to grow its earnings--is the company subject to violent earnings fluctuations which impair its ability to pay a dividend?

To help answer this question I've also included the standard deviation on their return on equity (ROE). Don't worry too much about the financial jargon, it's actually quite simple. ROE is simply net income divided by shareholders equity--a way to measure the profitability of a company--a higher number is better. Meanwhile standard deviation is a measure of how much, in this case during the last 10 years, ROE has dispersed from the average.

Ultimately, ROE standard deviation is just a measure of how a company's profitability might vary--a lower number is better.

Here's how they companies stack up in their respective industries. Genuine Parts Co.'s (GPC 0.29%) mix of automotive parts (a relatively recession resistant industry) industrial & office products means ROE tends to be stable and it sports a healthy current yield. McCormick & Co. (MKC -1.06%) also has a consistent ROE, and the spice company looks set to benefit from long-term demographic and cultural trends as more consumers come to favor spicier foods.

It's a close choice in industrials, but Illinois Tool Works (ITW -1.05%) gets the nod over 3M  (MMM -1.41%) due to a lower payout ratio, and readers already know how the company is expanding its operating margin -- suggesting increased FCF in future. 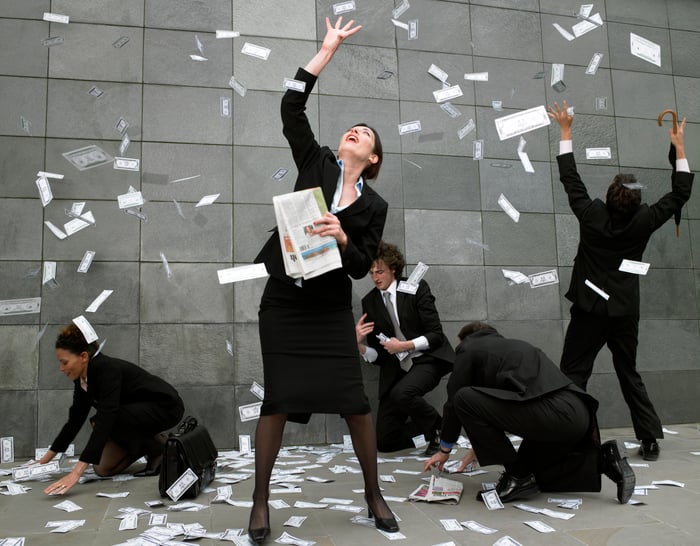 Having established the importance of earnings stability (standard deviation of ROE) we now need to look at two deeper questions. First, what is a company's potential to grow its dividends? Second, assuming a stock's value is the sum of its future dividends, what does its current price imply for the kind of overall returns investors can expect from the stock?

It's not important to go into the theory--I've put the equations in for those interested--, but 'g' in the table below represents the rate at which a company can grow its dividends--a higher number is better.

The implied overall annual return is shown as 'r' in the table below. This simply the theoretical annual return investors can expect based on the current stock price--a higher number is better,

Here again Genuine Parts looks relatively better placed in terms of total return, while McCormick & Co. looks to have more growth prospects than its peer. Again, it's close with the industrials, but Illinois Tool Works' cash flow should improve in future years while 3M faces questions over its organic growth prospects.

Becton, Dickinson and Co. is again superior to its peer, but the standout performer in the second test is PPG Industries -- in fact, its numbers are strong enough to justify switching choices from Ecolab. The paintings and coatings company's key end markets are automotive and construction. Both industries are cyclical, and have seen good growth (particularly automotive) in recent years -- making its ROE numbers look good. Nevertheless, PPG Industries' combination of high ROE and strong FCF generation make it the preferable choice for investors who can tolerate a bit more cyclical risk.

All told, dividend investors could create a mini portfolio out of these five dividend aristocrat stocks. All have the potential for strong annual returns to come while also offering a recurring and growing income. Moreover, if you believe that dividend investing is a valid strategy for seeking out stock outperformance, then the five companies discussed are well worth a look.

Lee Samaha has no position in any stocks mentioned. Image is from downtown Skopje. The Motley Fool owns shares of Becton Dickinson. The Motley Fool recommends Illinois Tool Works and McCormick. We Fools may not all hold the same opinions, but we all believe that considering a diverse range of insights makes us better investors. The Motley Fool has a disclosure policy.