Please ensure Javascript is enabled for purposes of website accessibility
Log In Help Join The Motley Fool
Free Article Join Over 1 Million Premium Members And Get More In-Depth Stock Guidance and Research
By Lee Samaha – Jan 26, 2016 at 10:01AM

The paint and coatings company may have lost market share to Sherwin-Williams in the U.S., but otherwise its outlook was good. Can it continue?

The global economy has rarely seen so much variation in geographic and industry growth prospects, and the latest results from PPG Industries (PPG 0.23%) were no different. The results and narrative around each region and end market contained a range of positives and negatives. The end result was a generally positive management outlook that belied fears that the economy is about to enter a recession. Let's take a closer look at the earnings and what to expect going forward. North America
If you ask investors to sum up the current global environment, the answer would probably be "North America growing consistently but moderately, Europe weak but a little better, Asia growing but at a slower rate."

However, a quick look at sales volumes trends for PPG shows strengthening in Europe, weakness in North America, and somewhat of a recovery in China. What's going on? 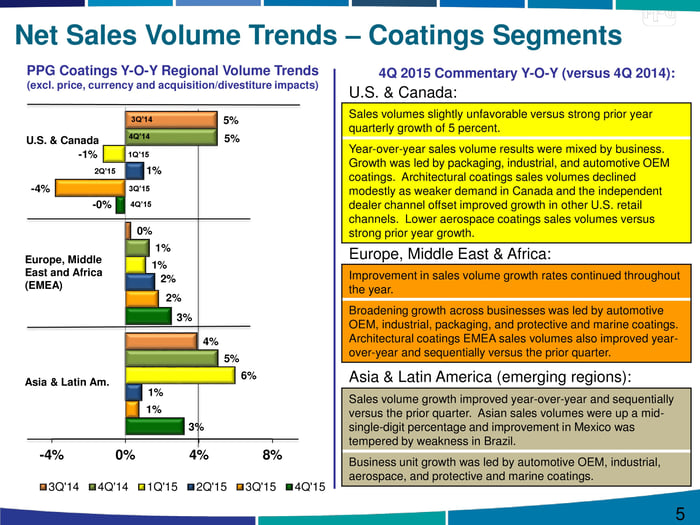 Starting with North America (46% of 2015 revenue), the negatives are outlined in the preceding chart, and management gave further color on the earnings call:

Weakness in aerospace coatings is somewhat surprising, given backlog and production increases at Boeing, but McGarry argued that it was partly due to strong comparisons from last year and a "certain customer order balance." Orders can be lumpy in aerospace, and it's easy to feel confident in McGarry's expectation that growth will return in 2016.

Similarly, he expects "continued improvement in construction markets in the U.S. and for Canada to stabilize." It's somewhat disappointing that PPG's architectural-based sales grew slower than the market last year, particularly as the U.S. nonresidential market is seen as delivering solid growth in 2016. Companies exposed to the sector have given positive outlooks. Investors will get a better read when PPG's housing and construction paint-focused peer Sherwin-Williams (SHW -0.19%) reports earnings.

Europe and China
Strength in 2015 in Europe (which accounts for 28% of sales) and management's confidence for 2016 are both somewhat surprising. The company appears to be focused on the automotive industry, with McGarry stating, "Favorable end-use market trends are expected to continue in 2016, particularly in automotive OEM coatings and industry build growth rates in Europe."

Also, China's car sales staged a strong fourth-quarter recovery, spurred by government incentives. The question is whether both regions' automotive sectors can continue to grow at this rate.

To be fair, McGarry's outlook calls for only "low-single-digit" growth in autos in China and the U.S. in 2016, so it doesn't look overly aggressive. Turning to China overall (Asia makes up 16% of sales), McGarry served notice of PPG's favorable industry exposure: "A primary driver for growth in Asia is increased consumer spending, which is beneficial to PPG as this affects the majority of our products sold in the region."

Indeed, there are signs of a strengthening consumer environment in China:

The takeaway
Analysts have PPG growing revenue at 2.2% and EPS at 10% in 2016. However, hitting those numbers depends largely on the construction and automotive markets. The outlook in China is somewhat dependent on the efficacy of government measures to stimulate the consumer, and for now, they appear to be working. Europe's automotive performance has been surprisingly good, but PPG needs to execute better in North America with architectural coatings. It's also possible that PPG lost market share to Sherwin-Williams in 2015 -- something to look out for when the latter gives earnings.

All told, PPG's earnings and outlook are broadly positive, and the company is well positioned for areas of growth in China. If current trends persist, then PPG looks set for a good year, but I think investors should wait and see on China's auto and construction markets before buying the stock.

Lee Samaha has no position in any stocks mentioned. The Motley Fool recommends Sherwin-Williams. We Fools may not all hold the same opinions, but we all believe that considering a diverse range of insights makes us better investors. The Motley Fool has a disclosure policy.