The company is favorably positioned in the HVAC market, and its peers United Technologies, Johnson Controls, and Lennox International have given positive outlooks. Is the stock a buy?

The coming year is likely to be a difficult one for the industrial sector. U.S. industrial production is in a pronounced slowdown, and uncertainties surround China's outlook. That said, there are pockets of strength in the sector, and U.S. nonresidential construction is one of them. Here's a look at stocks in the heating, ventilation and air conditioning (HVAC) market and, in particular, at why Ingersoll-Rand Plc (TT 0.14%) and Lennox International (LII 1.97%) are well placed to benefit.

Ingersoll-Rand's favorable exposure
Ingersoll-Rand hasn't given guidance for 2016 yet, but you can piece together what its main HVAC competitors have been saying about next year. North American HVAC matters because the company generates 63% of its revenue from the region, and 76% of total company revenue from its climate segment. In turn, around 80% of its climate revenue comes from HVAC.

As CEO Mike Lamach said on the company's recent third-quarter earnings call, "Of that, really 60% of the company is HVAC and more than 60% of that is in North America. So you have got, really, 40% of the company with pretty strong growth dynamics going into 2016."

Competitors include United Technologies (RTX 1.08%), Johnson Controls (JCI 0.41%), and Lennox International. Below is a breakdown of each company's market share in terms of AC. 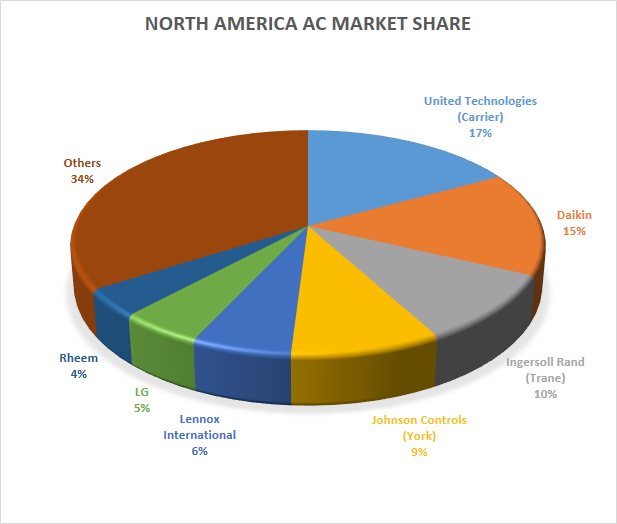 In short, favor Ingersoll-Rand if you want U.S. nonresidential exposure, and Lennox International for U.S. residential. United Technologies and Johnson Controls have significant other operations that dilute HVAC's importance to their earnings.

Peer group outlooks
The following guidance all pertains to 2016.

As noted earlier, Ingersoll-Rand's Lamach didn't give explicit guidance for 2016 -- that will come in February -- but he did say this on the third-quarter earnings call:

I think HVAC in Europe, Eastern Europe, even potentially the Middle East will be growth organically for us, probably not the same rate of course as North America. But you have got that growing. So in essence, a large part of the business is growing for us.

However, China HVAC revenue is expected to be down "low single-digits" in the fourth quarter of 2015.

Is Ingersoll-Rand a buy?
Turning to valuation matters, a rough measure to use is enterprise value (market cap plus net debt) over free cash flow. It's useful because you can compare companies with different debt levels and look at how much cash shareholders can theoretically pull out for dividends and buybacks. As you can see below, none of those stocks looks particularly cheap right now. 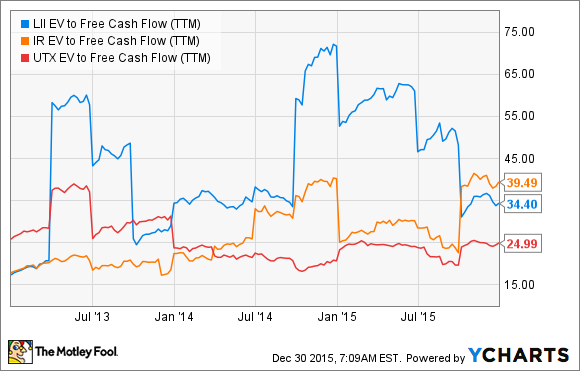 However, their EV/FCF multiples are set to drop substantially in future.

Lennox International is attractive for its U.S. residential HVAC exposure, and it has good growth prospects, but the stock isn't cheap and appears to be buoyed by speculation that Johnson Controls could be interested in a bid.

Ingersoll-Rand is relatively well placed in the industrial sector, but it looks fairly valued at around $56. Nevertheless, if it dips in a general market sell-off, the stock will be well worth picking up.

Lee Samaha has no position in any stocks mentioned. The Motley Fool owns shares of Johnson Controls. We Fools may not all hold the same opinions, but we all believe that considering a diverse range of insights makes us better investors. The Motley Fool has a disclosure policy.