After taking a pummeling in June, Shares of Teekay LNG Partners, Teekay Tankers, and Teekay Corp. look cheap, but may not be a value yet.

What: Shares of Teekay (TK -2.87%) and its operating subsidiaries Teekay Tankers (TNK -4.50%), and Teekay LNG Partners (TGP) all saw their stock prices decline more than 13% in June. The one exception of the Teekay group was Teekay Offshore Partners (TOO), which declined a more modest 5% last month. The largest culprit for these stocks plummeting was the decline in shipping rates for oil and LNG tankers. 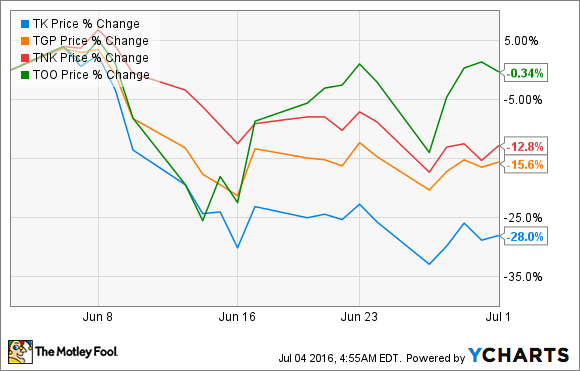 So what: If looked at as one whole business, Teekay can be tough to unpack. So let's break it up into various segments

Teekay has a stake in each of these companies, and generates its profits from distributions. So as the success of each subsidiary goes, so too does Teekay Corp. The past several months have been a difficult time for this business model. Back in December, the company and all of its subsidiaries cut their respective dividends to shore up their balance sheets and use internally generated cash to pay for some new fleet vessels.

Since that time, things haven't improved that much, unfortunately. The average shipping charter rates for both oil tankers and LNG carriers have continued to decline since 2015. The big issue here is that many shipping companies have invested heavily in expanding their fleets and many of those new ships are coming online. However, many of the LNG terminals that those vessels were slated to serve have not yet come online, and oil demand has not been as robust as originally planned. This has led to a large oversupply of vessels that is forcing companies such as Teekay to take reduced charter rates.

The one bright spot for Teekay this month, if you want to call it bright, was when Teekay Offshore Partners was able to raise about $200 million through an equity raise. The $200 million was enough to fund the remaining of its $1.6 billion expansion plans without having to add more debt to its very bloated balance sheet. Once this fleet expansion is complete, it should help to throw off more cash that can be used to clean up the balance sheet as well as distribute cash to its parent.

Now what: It's hard to put a pin on exactly what to make of Teekay right now. On the one hand, its subsidiary partnerships have strong relationships with customers and quite a bit of contract coverage on its fleet. While there is a large oversupply of LNG carriers today, there are several major LNG export facilities that are expected to ramp up to full operations in the coming 18 months that will require their services. The same can be said for its fleet of FPSOs and its tanker fleet.

On the other hand, all of the company entities carry heavy debt burdens that need to be reduced in order to make these companies worth while investments. In its investors presentations, management has said on multiple occasions that increased cash flows should make this debt load more palatable. This recent energy market downturn has taught us that companies can't simply rely on growing into their debt loads and will need to be reduced, not just managed. Until we see a material reduction in the company's debt load, it's probably best to take a wait and see approach with these stocks despite their greatly reduced stock prices.