What: Shares of Harley-Davidson Inc. (NYSE:HOG), one of the world's most iconic brands and a famous motorcycle manufacturer, are giving back a chunk of last week's gains as the share price tumbles 10% Monday morning. 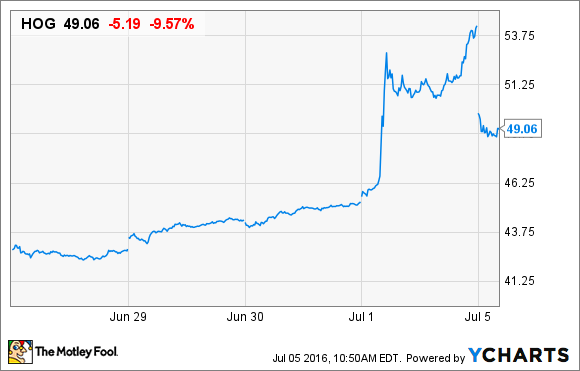 So what: Part of the reason for the stock's tumble this morning is likely the downgrade from RW Baird, which noted the valuation jump following buyout speculation. And without any comment from either Harley-Davidson or KKR & Co. (NYSE:KKR), which was the speculated interested entity, or more rumor confirmation from a reliable source, it's no surprise investors who jumped onboard Friday for a quick gain on a potential buyout are now selling their shares, thinking a deal is less likely.

Now what: A company going private isn't a frequent development, but Harley-Davidson's buyout rumor seemed plausible because it does have a strong balance sheet, an incredible brand, and consistent cash flow. That means it's less risky for a company wishing to buy the company and take it private, giving Harley-Davidson a chance to work on future product strategies to lure in a new and younger demographic outside of the pressure and demanding shareholders in the public eye.

For now, expect Harley-Davidson to continue giving up its gains from last week unless the market hears more solid information about the buyout. However, if the latter does happen, at BMO analyst Gerrick Johnson's estimated price of $65 per share, Harley-Davidson's shares could spike again.

Ultimately, this is the type of speculation we at The Motley Fool dissuade investors from acting on; we like to find solid businesses to invest in for the long term.