3 graphs that prove Brexit is no Lehman Brothers moment

In order to show this, I'm going to show three graphs with the CBOE Volatility Index (the "VIX") and the St. Louis Financial Stress Index. You've probably heard of the former, which is sometimes referred to as Wall Street's "fear index." Derived on S&P 500 option prices, the VIX measures market expectations for near-term stock market volatility.

The St. Louis Financial Stress Index (STLFSI) measures the degree of financial stress in the markets and is constructed from 18 separate weekly data series. Here's how to interpret the index:

The first graph displays both indexes during a six-month period centered on the day of Lehman's bankruptcy filing (Sept. 15, 2008): 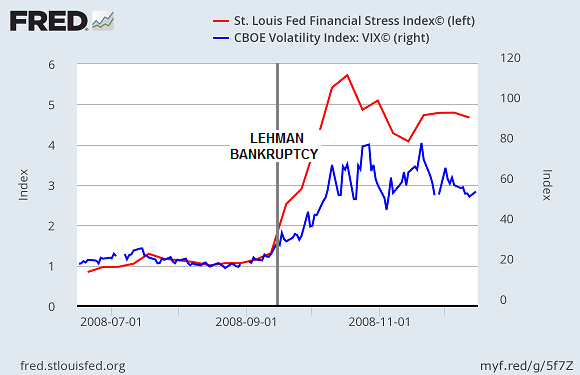 The response is immediate and dramatic. Within two weeks of Lehman's bankruptcy, both indexes would set new all-time highs (the STLFSI's had a 15-year history at that point, while the VIX series went back nearly two decades).

Now, we go through the same exercise for Brexit, beginning three months before June 24, the Friday on which referendum result reverberated through global markets. The graph below shows the STLSI on the same scale as the previous one: 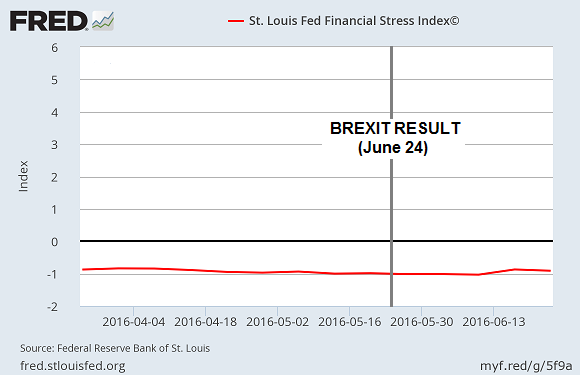 Doctor, the patient is flatlining. Yes, nurse, but unlike a cardiogram, that's a very reassuring state. As you can see, relative to the Lehman event, Brexit had no impact on financial conditions whatsoever. Note that the graph has remained solidly below zero, indicating below-average financial market stress:

Now let's take a look at the VIX: 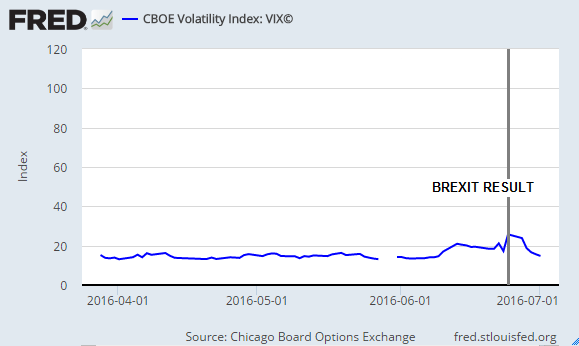 In this case, you can spot an increase in the VIX on the day markets first digested the referendum result (the point of intersection with the vertical grey line), but it's nothing compared to the post-Lehman spikes. Furthermore, the index went on to fall during the next four sessions; its current value is significantly below its historical average.

When Lehman fell, the degree of trust that binds financial institutions collapsed, and critical funding markets came to a virtual standstill. The amount of fear paralyzing markets was unprecedented in the post-war era (for the millennials out there, that's WWII, not Iraq).

The three graphs above make it very plain that nothing of the sort has occurred since Brexit. Does this mean Brexit has had no impact? Well, no -- just ask an Italian banker. Still, while trying to predict the knock-on effects is impossible, Brexit was not a systemic event -- as far as financial markets go; the European Union would say differently -- and there is little evidence to suggest it will trigger one.

In absence of official figures on Brexit impact expect plenty of questionable data from people you've never heard of pic.twitter.com/4O2zf2CJU2