The company has taken one potential problem off its plate. 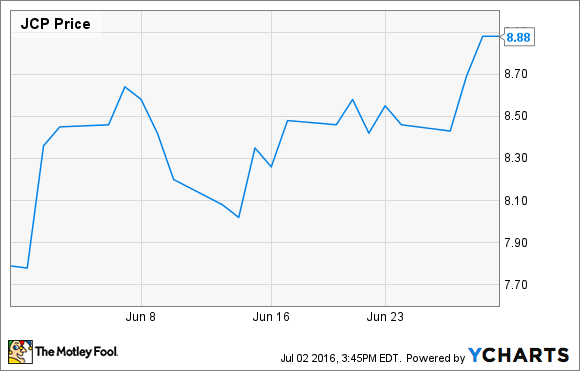 After closing May at $7.29, the company's stock began to climb when it announced its intention to refinance the loans on June 10. The share price began to climb again when J.C. Penney reached a deal to close the refinancing on June 23. Shares finished June at $8.88 for a nearly 14% gain, according to data from S&P Global Market Intelligence.

The new loan has a lower interest rate, and proceeds from it will be used to pay off the remaining balance from the previous loan. The company will save approximately $24 million in annualized interest expense savings. CEO Marvin Ellison elaborates:

We were pleased with the strong demand by investors, which allowed us to both lower our interest rate and extend the maturity of our term loan. We proactively pursued a refinancing due to favorable market conditions and the ability to further enhance our financial flexibility and liquidity position. This reflects the improved performance of our company and the market's confidence in the company's strategic goal of achieving $1.2 billion in EBITDA by 2017.

Now what: While this was generally a routine transaction, it takes one worry off the plate of the recovering company. Going forward, the new loan gives the company flexibility, which should let it continue its slow path back to relevance.

In the future, the stock price will be driven by sales, not transactions like this one, but clearly shareholders are relieved that the deal has been done. Now Ellison and his team can work to continue new initiatives, such as returning appliance sales to many of its stores while also growing the chain's online business.

Daniel Kline has no position in any stocks mentioned. He wonder why John Cusack can't get any good roles anymore. The Motley Fool has no position in any of the stocks mentioned. We Fools may not all hold the same opinions, but we all believe that considering a diverse range of insights makes us better investors. The Motley Fool has a disclosure policy.

AMC, J.C. Penney, and Norwegian Cruise Lines: One of These Is a Screaming Buy
376%