In a couple of months, you won't have to move to a new state to enjoy a McDonald's (NYSE:MCD) breakfast sandwich in either biscuit or English muffin form. The world's largest burger chain said on Wednesday that it will expand its all-day offerings come September. It will offer biscuit, McMuffin, and McGriddles sandwiches at all locations beyond normal breakfast serving hours.

McDonald's introduced its all-day breakfast menu last October, making select items available beyond its morning cut-off times. It wasn't the complete breakfast menu. It would have been a challenge to keep turnaround times moving at an efficient clip if it dramatically expanded the menu so, it chose the more popular morning items, but decided to take a stand on the types of sandwiches that were offered.

"When we made the decision to make All Day Breakfast a reality, we had to look at how we prepare breakfast, lunch and dinner," McDonald's explains on its website. "Bottom line: there wasn't enough room on our grills to make the eggs for both our McMuffins and our Biscuits."

The end result was the most of the country was offered McMuffins throughout the day, but select states in the Southeast stuck with biscuits and McGriddles. 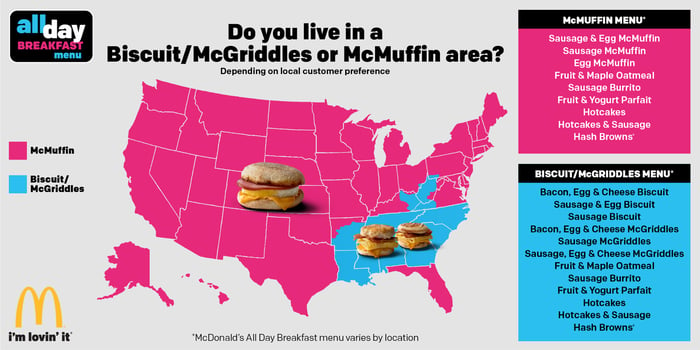 McDonald's doesn't explain in its announcement how it suddenly made enough room on its grills to accommodate the different egg types included in its breakfast sandwich, but biscuit sandwich and McGriddles fans outside of the Bible Belt aren't going to care about the answer, as long as they have all-day access to their Mickey D's faves.

All-day breakfast has been a game changer at McDonald's. It's probably not a coincidence that its stateside comps turned positive during the fourth quarter of last year, just as it was giving many of its morning staples new life after 10:30 a.m.

It may have been a coincidence -- after roughly two years of declining unit-level sales, it's that much easier to manufacture improvement -- but it's hard to argue that offering many of its popular items all day long wasn't incremental to overall sales. The challenge was always going to be if it could broaden its appeal without either confusing customers or infuriating them with longer wait times or incorrect orders.

McDonald's was singing an entirely different tune last year. It had a new CEO and a goal to simplify its menu as drive-thru wait times started to increase and customer service complaints started pouring in. That all seems to be on the back burner with a broader menu, positive comps, and a stock hitting fresh all-time highs in May.

It's a smart time to expand its offerings. Comps at McDonald's will be pitted against last year's rebound starting with the holiday quarter and McDonald's can't afford to hit another long stretch of negative comps. It needs to keep making bread, even if that means offering different kinds of breakfast bread.