It's not the dividend increases that are important to these banks' shareholders.

It was recently announced that the Federal Reserve had approved the capital plans of most major banks, and it was subsequently revealed that many banks are increasing their dividends, buybacks, or both. While the stress test results should be welcome news to anyone invested in U.S. bank stocks, shareholders of Bank of America (BAC -1.64%), Citigroup (C -1.44%), and Goldman Sachs (GS -0.75%) should be especially happy.

After the results of the stress tests were announced, several banks announced they would be increasing dividends, buybacks, or both. In the cases of Bank of America, Citigroup, and Goldman Sachs, here are the details:

Why buybacks are the most important part

As you can see, Bank of America and Citigroup are spending significantly more money on stock buybacks than dividends. And while we don't know Goldman's exact plans yet, they have historically emphasized buybacks, and I don't expect this to change. For investors, this is great news.

In a nutshell, the buybacks are the most important thing for these three banks because they all trade for substantial discounts to the value of their assets. 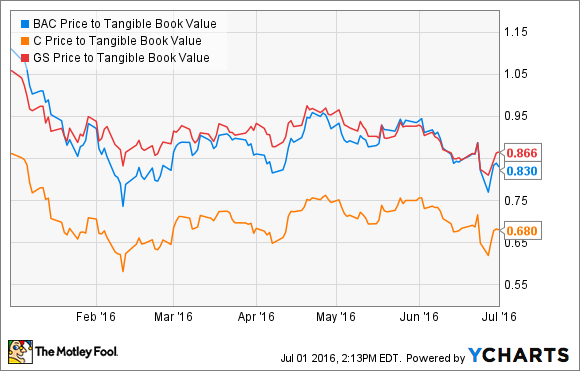 When you add intangible assets such as branding, goodwill, patents, etc., the price-to-book valuations look even more attractive. 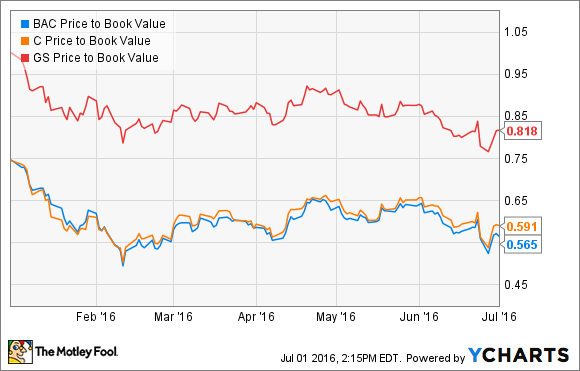 In other words, these banks can buy their own assets back for significantly less than they're worth. Think of it this way – if you could buy hundred-dollar bills for $80, wouldn't you buy as many as you possibly could?

If you could buy a hundred-dollar bill for $80, you'd be creating an instant $20 in value for yourself every time you bought one.

Similarly, these banks are creating instant value for shareholders when they buy back their own stock at such depressed valuations. Consider Bank of America's case, and its recently authorized $5 billion buyback. As of this writing, Bank of America shares are trading for $13.11, and the bank's most recently reported tangible book value is $16.17 per share. This means that Bank of America instantly creates $3.06 in value for each share it buys back at this price level.

With a $5 billion authorized buyback, Bank of America could buy more than 381 million of its shares, which would create about $1.17 billion in automatic shareholder value. Even more impressive, based on the book value of $23.12, which includes tangible assets, $3.8 billion of instantaneous value will be added.

Based on the number of shares that would be left after the buyback, this translates to about $0.38 in new value per share just because of buybacks at a discount. This is on top of the inherent increase in value that would already come with buying back nearly 4% of the company's outstanding shares.

Now, I realize that the entire $5 billion buyback won't take place at the current share price. Rather, it will occur gradually. Still, the potential to create value for shareholders is enormous. Besides, I would expect the banks to be rather aggressive with their buybacks while shares are so cheap.

The bottom line is that these banks are right to emphasize buybacks over dividends while share prices are so low. These banks certainly are not without risk, but I feel that the current valuation more than makes up for it. As I said before, the market is giving you the opportunity to buy $100 bills for $80. I've taken advantage of low bank stock prices this year, and you can do the same.