Despite releasing a series of positive announcements, shares still slumped. Here's why.

What: Investors of Nektar Therapeutics (NKTR -1.22%) are off to a rocky start to the year. Shares of the small-cap biopharma have dropped more than 16% since January, according to data from S&P Global Market Intelligence. 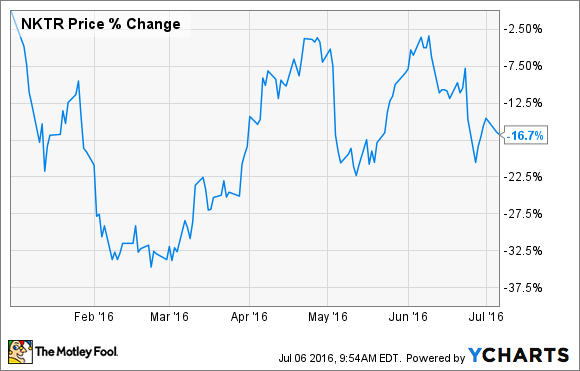 So what: Despite the sell-off, the news flow out of the company this year has been pretty upbeat.

Here's a handful of highlights from the first half of the year:

So if the news flow from the company was consistently good, why did shares still fall? My hunch is that Nektar's stock simply got caught up in the general biotech sell-off.

In fact, when you compare Nektar's year-to-date returns against a biotech ETF like the iShares Nasdaq Biotechnology, the company's performance looks quite good. 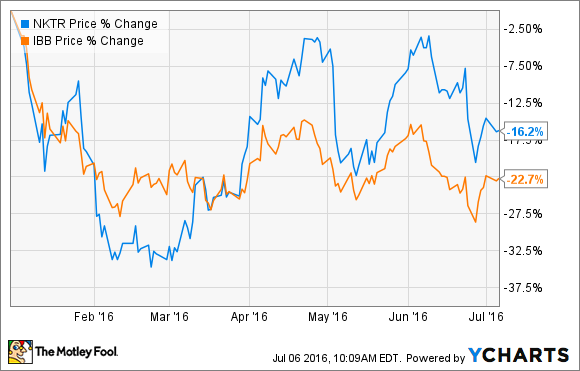 Now what: Even though shares have declined this year, I think investors have plenty of reasons to be encouraged by the company's progress.

Sales of Movantik, the company's AstraZeneca-partnered drug used to treat opioid-induced constipation, are off to a strong start to the year. That offers Nektar a good chance at earning millions in milestone payments and royalties if the drug can continue to grow at a brisk pace.

The company's pipeline looks like it's in good shape, too. Investors should have phase 3 data in hand for NKTR-181, the company's potential treatment for chronic low back pain, in early 2017.

Phase 3 data should also be available later this year on Cipro DPI's clinical trials as a treatment for non-cystic fibrosis bronchiectasis. Nektar has partnered with Bayer HealthCare on this product, and the FDA has already granted it orphan-drug status.

With sales of Movantik and Adynovate poised for growth and a number of data readouts on the way, I think there are reasons to be excited about owing Nektar's shares.

Brian Feroldi has no position in any stocks mentioned. Like this article? Follow him on Twitter, where he goes by the handle @Longtermmindset, or connect with him on LinkedIn to see more articles like this.