Forget low-yield Treasury bonds! Here's a much better way to get paid each and every month. 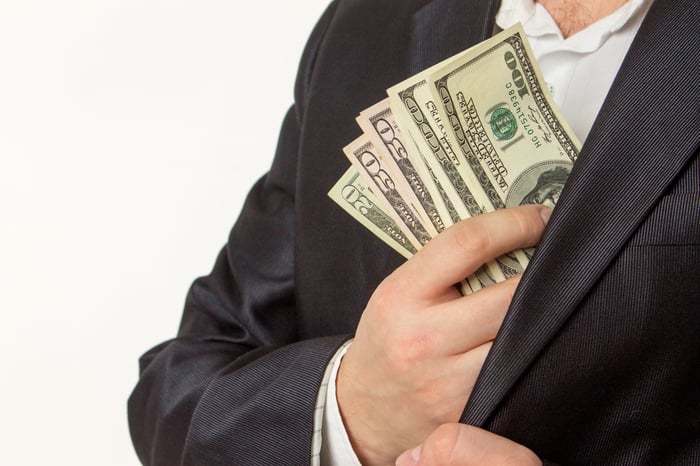 If you're an investor who's reliant on interest-based income, the current yield environment is about as tough as you'll ever see. Japan has adopted a negative interest rate policy, and fear in Europe following Brexit has helped pushed German 10-year bonds into negative-yield territory. According to the latest Fitch Ratings report, around $11.7 trillion worth of global debt now has a negative yield attached to it.

Within the U.S., you'll struggle to find a CD paying more than 1%, and U.S. Treasury bonds yields are all nearing record lows, with the 5-year T-bonds paying a meager 1% and the 30-year not much better at 2.24%. Following a notoriously weak May jobs report and Britain's decision to leave the European Union, a move by the Federal Reserve to further tighten monetary policy just doesn't seem likely.

This leaves income investors with one smart recourse to beat inflation: dividend stocks.

Among high-yield dividend stocks there is a special class of companies that reward their shareholders on a monthly basis as opposed to once a quarter. Including ETFs and bond funds, there were 127 high-yielding assets investors could buy with a market valuation of at least $300 million, a yield of 4%+, and a monthly dividend as of July 1. Here are three that I happen to fancy.

The mortgage real estate investment trust (mREIT) industry hasn't received much love from investors over the past three years considering that almost everyone was expecting the Fed to raise interest rates. Mortgage REITs typically borrow money in the short-term and invest their money in long-term fixed-income securities. When interest rates rise, their net interest margins shrink. When rates are falling or remain steady and low, their net interest margins expand, or the REITs themselves use leverage to boost profitability.

American Capital Agency (AGNC -1.32%), primarily an agency mREIT, is looking to benefit from weak U.S. GDP and jobs growth and Brexit fears by feasting on continued low interest rates. This should allow it to borrow at a cheap cost in the short-term while levering up its fixed-income portfolio to expand its distributable cash. With no catalysts suggesting that lending rates will rise anytime soon, it would appear that the monetary tightening concerns tied to American Capital Agency and the mREIT industry may be overblown.

Further, since American Capital Agency deals predominantly with agency-only mortgage-backed securities, it's protected from default by Fannie Mae or Freddie Mac. Yes, agency-backed assets come with lower yields than non-agency assets, but investors have the added security of knowing their mREIT's investment portfolio isn't going to implode if the housing market slides.

Currently paying a hefty $0.20 per month, American Capital Agency and its 12.2% yield are certainly worth a closer look.

Sticking with the REIT theme -- which you'll notice is a trend among monthly high-yield dividend stocks, since REITs are required to distribute 90% or more of their earnings in the form of a dividend -- we have EPR Properties (EPR -0.10%), a diversified REIT that primarily invests in real estate assets in the entertainment, recreation, and education industries.

As you might imagine, EPR Properties can be somewhat exposed to economic downturns due to its reliance on entertainment and recreation, both disposable income industries. It owns movie theaters and ski and water parks that thrive when the U.S. and Canadian economies are growing, and can struggle when growth is stagnant. But there's still a lot to like. For starters, EPR Properties protects itself by locking in long-term leases with its clients. Between 2016 and 2026 only about 4% of its annual revenue is exposed to lease expirations per year. Most of its leases average 11+ years at the moment, and the vast majority have rent escalators of between 2% and 10% built in every 5 to 10 years.

Diversity is another reason to like EPR Properties. A decade ago the company was wholly reliant on the entertainment industry. Today, its recreational, education, and other categories comprise nearly half of its annual revenue. It's also reduced its top five tenants to just 50% of its annual revenue in 2015, from 64% in 2011. Being more diverse means less chance of an adverse shock if U.S. economic growth slows and consumer spending falls.

EPR has also been steady as a rock when it comes to operating performance. Net income to common shareholders has jumped 19% per year, on average, since 2011. Currently paying out $0.32 per share on a monthly basis, EPR Properties' 4.8% yield is quite the looker.

Lastly, income seekers who want a monthly payout would be wise to consider healthcare REIT LTC Properties (LTC 0.41%), which invests in skilled nursing facilities and assisted living properties around the United States.

Like most healthcare companies (or in this case REITs), the biggest concern is what happens over the long-term to government-sponsored care. The federal government would prefer to pull back on private business' reliance on Medicare and Medicaid, and that could, in theory, have a negative impact on skilled nursing properties, which in turn could adversely impact LTC Properties. But I firmly believe that LTC Properties is on the right side of the fence in a numbers game that it's set to win. According to the U.S. Census Bureau, the elderly population is expected to nearly double between 2012 and 2050 to 83.7 million people. During this same timeframe, the oldest portion (85 years of age or higher) of the population is expected to triple in size. Health education and pharmaceuticals have improved, meaning the healthcare system is relied on more than ever to aid in increased life expectancies. This alone should bode well for LTC Properties' occupancy rate and lease pricing power in the years and decades that lie ahead.

Like EPR above, investors can also take solace in LTC Properties' growing diversification. As of June 2016, it had 212 properties located throughout 30 states, with 35 different operators. Its top five operators comprised about 56% of its annual income, with the largest, privately held Prestige Healthcare, accounting for 15%. Furthermore, 51.7% of the patients within LTC-owned skilled nursing facilities are private payers, which is nearly double the industry average for skilled nursing facilities of 26.8%. This means far less chance of Medicare and Medicaid cuts hurting LTC compared to its peers.

With an $0.18 monthly payout and a 4.2% yield, this is a high-yield monthly dividend stock that could be worthy of a spot in your portfolio.

AGNC Reports Earnings and Comforts Investors About the Dividend
366%