The nation's biggest wireless network is increasing its already-steep prices. Verizon (NYSE:VZ) announced recently that it's "transforming" its wireless service plans, and that prices are going up $5 to $10 per month. Verizon will provide higher data caps for that price as well as a couple of other perks. Current customers will have the option to keep their original pricing and data caps.

The move exemplifies Verizon's pricing power in the industry. Verizon has managed to hold onto its high-end customers despite strong competition in the wireless space from T-Mobile (NASDAQ:TMUS), Sprint (NYSE:S), and AT&T (NYSE:T). The increase in price shouldn't impact the company's ability to attract customers looking for a superior network or hold onto its existing customers, as the latter don't have to change.

Verizon's churn rate is the lowest in the industry. During the first quarter, the company saw just 0.96% of its subscribers leave for a competitor. Comparatively, AT&T's churn rate came in at 1.10%. Smaller carriers T-Mobile and Sprint sported churn rates of 1.33% and 1.61%, respectively.

Importantly, Verizon continues to add new phone customers in spite of aggressive pricing and promotions from Sprint and T-Mobile. Over the last year, the company added 1.2 million postpaid phone subscribers and 4.5 million total postpaid connections. AT&T hasn't been able to stand up to the competition nearly as well, seeing some of its postpaid phone customers leave.

With the recent price increase, investors shouldn't expect much to change regarding Verizon's ability to attract new customers and retain its existing ones. In fact, the company is adding a couple of perks that provide added value to customers at very little cost to Verizon.

On top of the additional data allotments included in Verizon's higher-priced plans, the company is going to roll over unused data from month to month, giving subscribers a little bit more breathing room. The move follows T-Mobile's Data Stash promotion, which rolls over unused data for up to 12 months, and AT&T, which provides the same one-month rollover period.

Customers continually bumping up against their data caps can also opt into Safety Mode, which will throttle internet speeds down to 128 kbps (i.e., a snail's pace) after the data limit is reached instead of charging customers for overages. Verizon will charge most customers $5 per month to activate Safety Mode, but subscribers on its two largest plans (meant for families) will get the feature at no added cost. 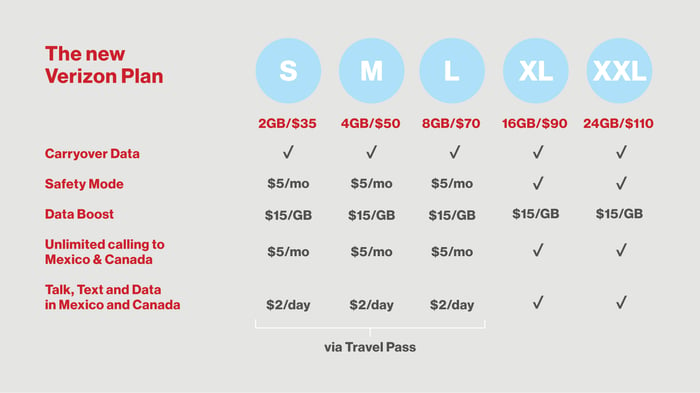 These strategies work to move customers up the price ladder and keep its highest-value customers -- families -- on board. Customers with multiple devices are already less likely to churn, so providing them with extra value will only reinforce that behavior. Verizon also makes the most off of those customers, charging an extra $10 to $20 per device connected to a family plan regardless of how much data they use.

Meanwhile, the additional cost to Verizon is relatively little. The additional load on Verizon's network from the increased data caps is well within Verizon's capacity, and it's unlikely customers will change their behavior drastically because of a modest increase in allotments. As such, Verizon is poised to generate higher revenue per user with little change in cost of revenue. That's a good recipe for better margins and higher profits.