Offshore oil driller could be a wild ride as market conditions slowly improve.

Atwood Oceanics' (ATW) stock has been a whirlwind lately, dropping nearly 19% following the Brexit before bouncing back 7% a few days later. These types of volatile swings can create a great deal of heartache for an investor. Which is why unless you're day-trading or looking to buy low, its best to show patience and ride out the stomach-wrenching dips.

When it comes to Atwood, though, the question becomes whether or not you should be investing at all. Let's look at the company's long-term prospects and determine if its ridiculously low valuation indicates an ideal buying opportunity.

As oil rigs slowly come back online in the U.S., there is definitely an argument to be made that you should scoop up offshore oil drillers at deflated prices. Offshore drilling will probably lag behind the initial increase in onshore drilling, as it can be a far pricier endeavor. According to Baker Hughes, the current U.S. rig count stands at 421, which is still down over 50% from one year earlier. The offshore rig count is off 25% and stands at 21.

Several factors will affect the speed at which rigs come back online, such as oil prices and customer demands. What is almost certain, though, is that the recovery will be slow and offshore drillers are unlikely to see many new contracts this year and probably longer -- which is why it is somewhat comforting to see how Atwood has managed its finances during this downturn.

Atwood reported $122.4 million in net income for the first quarter this year, which is nearly identical to its net income from one-year prior. Its $660 million in total liquidity as of June 1 gives it some flexibility to invest and cover unexpected expenses. And on top of that, given its expected expenditures, expected cash flows, and lack of debt maturities before 2019, the company anticipates the same level of liquidity in the first quarter of 2018.

The company also recently made a cash offer to purchase up to $150 million of its outstanding notes due in 2020, which should further improve its balance sheet.

Regardless of how good its balance sheet looks, a company needs business to be successful. There is no guarantee of new contracts or contract renewals in the coming years, even if the rig count continues to improve.

As it currently stands, Atwood has only three contracts that extend into 2017 and one that extends into 2018. Most of its drilling contracts end this year, which could add more rigs to the three rigs that are already idle and being actively marketed. And while the company pushed back the construction of two ultra deepwater rigs and their accompanying milestone payments for delivery for a year, that seems like a tacit acknowledgment that there is little near-term business for additional rigs. 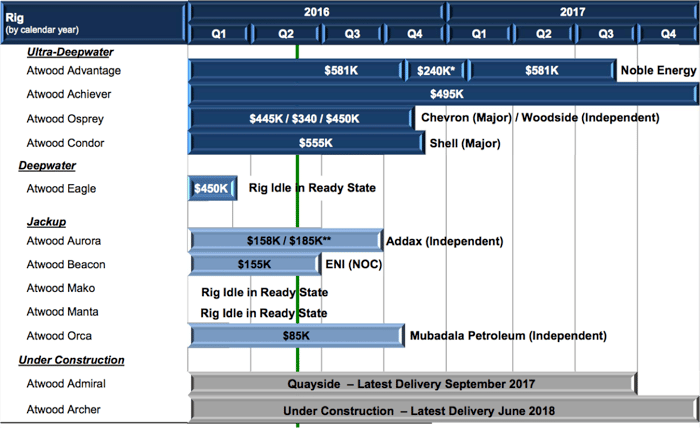 Atwood touts its relatively young, highly modern fleet that can pull in high day rates, but it simply doesn't matter how effective a rig is if it sits idle.

This is a large reason why the stock, and the industry as a whole, seems so cheap. Its 1.86 trailing-12-month price-to-earnings ratio is comparable with other competitors, such as Transocean (RIG -2.87%) at 2.65, Noble Corporation (NEBLQ) at 4.63, and Seadrill Partners (SDLP) at 2.23.  While Atwood's backlog is in considerably worse shape in comparison, all three companies will face significant drop-off in contracts and backlog. Transocean and Noble Corp will both see its backlogs drop by 50% between now and 2020, while Seadrill Partners only has two contracts that extend to that period.  That's not taking into account the possibility of contract cancellations, which struck Seadrill in May.  With such little confidence in the near-term future of offshore drilling, there is little appetite to gamble on when these companies can once again reliably secure new contracts.

You have a tough call to make on Atwood Oceanics. Yes, it seems undervalued, its balance sheet is reasonable, and it has the assets to profit off of the future oil recovery. But that recovery, as far as Atwood and its dependency on offshore drilling contracts is concerned, might be several years away. If you choose to buy while the industry is at a low point, be prepared to demonstrate some patience as the company attempts to secure new contracts post-2016.

David Lettis has no position in any stocks mentioned. The Motley Fool owns shares of and recommends Atwood Oceanics. We Fools may not all hold the same opinions, but we all believe that considering a diverse range of insights makes us better investors. The Motley Fool has a disclosure policy.

Investors Finally Figured Out What to Make of Atwood Oceanics, Inc.'s Earnings
363%