Disney's (NYSE:DIS) The BFG recently bombed at the box office, grossing less than $20 million domestically on its opening weekend. As of July 6, the film has grossed $29 million domestically and only $4 million overseas -- indicating that it's very unlikely to break even on its production budget of $140 million.

After deducting the 20% to 50% cut paid to theaters as well as unknown marketing expenses, the House of Mouse will likely take a big writedown on the Steven Spielberg-directed film, which was adapted from the Roald Dahl novel of the same name. So how did such an expensive film fare so poorly? 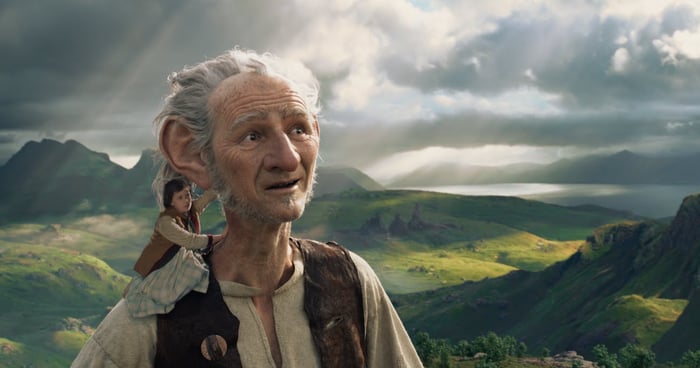 Why The BFG bombed

The BFG received decent reviews, with a score of 73% among critics at Rotten Tomatoes. Unfortunately, Disney underestimated how popular its own Finding Dory would be, and had expected the Pixar film to cool off by its third weekend. Dory didn't, finishing its third straight weekend at the top and crushing The BFG, which targeted a similar demographic of family viewers.

The BFG's lack of well-known stars and the low awareness of Dahl's original book sent many viewers to Dory instead. Moreover, other adaptations of Roald Dahl books, like Fantastic Mr. Fox, James and the Giant Peach, The Witches, and Matilda were all critically acclaimed but bombed at the box office. The only Roald Dahl-based film which was a major hit was Charlie and Chocolate Factory, which grossed $475 million worldwide for Time Warner's (NYSE:TWX) Warner Bros. on a budget of $150 million.

The BFG now joins Alice Through the Looking Glass as Disney's second big misstep of the summer. But on the bright side, the strong box office results of Star Wars Episode VII, Captain America 3: Civil War, The Jungle Book, and Finding Dory should easily offset The BFG's losses, so investors shouldn't fret too much over this box office disaster.

The BFG might eventually generate more revenue overseas. Alice Through the Looking Glass eventually grossed $261 million worldwide, which probably couldn't offset its production and marketing costs but still reduced the overall losses. Fox's (NASDAQ:FOX) Independence Day also got off to a weak domestic start, but it has since grossed $268 million worldwide on its budget of $165 million. Therefore, Disney will still probably take a loss on The BFG, but it won't be as bad as the initial numbers suggest.