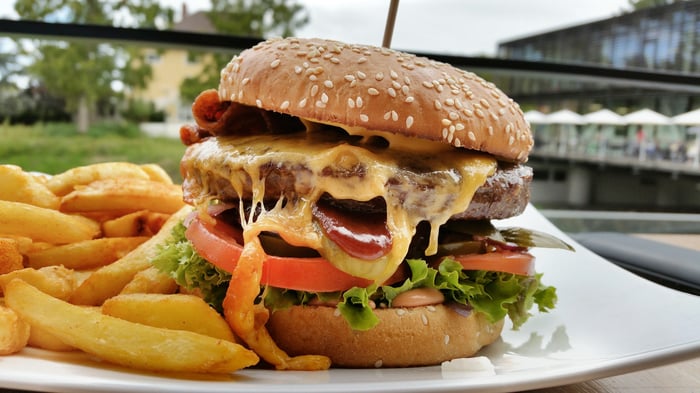 The appeal of better burger chains has been their higher quality and fresh ingredients, but consumers -- and investors -- seem to be pushing back from the table. Image source: Getty Images.

The better-burger craze may have run its course, a victim of its own success. As chains like In-N-Out, Five Guys, and Shake Shack (NYSE:SHAK) ramped up expansion to meet what seemed like an insatiable appetite for upscale, high-priced hamburgers, they may have oversaturated the market and now it's turning against them.

According to Nomura analyst Mark Kalinowski, comparable store sales at fast-casual burger chains have "decelerated meaningfully" in the first quarter, yet with the expansion plans they still have on the table, it might just get worse.

A hamburger stand on every corner

The Habit (NASDAQ:HABT) saw the growth rate in total revenues cut in half in the first quarter as comps fell from almost 13% to just 2%. Yet, it still plans to open around 30 restaurants in 2016, adding to the 140 locations already operating. Management continues to believe there is room for more than 2,000 restaurants altogether. Similarly, privately held Five Guys has over 1,000 restaurants operating now and over 1,500 more in development.

Although that makes the growth plans for rivals like Shake Shack and In-N-Out Burger seem tame by comparison -- the former plans to open 16 new Shacks this year and next, while In-N-Out plods along because it refuses to franchise -- the explosion of chains around them will still have an impact on their results. Shake Shack, for example, saw its growth rate cut by 23% in the first quarter as same-Shack sales continue to dwindle.

It's a trend occurring not just in the better-burger space, but across the entire fast-casual industry.

Nation's Restaurant News reported fast-casual restaurants saw their stock valuations decline by 9% in the second quarter -- worse than the out-of-home dining segment as a whole -- and eliminate all the gains the sector made in the first quarter. Even factoring out the implosion of Chipotle Mexican Grill following its food-quality crises, and that of Cosi, which is now literally a penny stock, the segment's returns for the second quarter are still down more than 4% from the year-ago period. By comparison, the results in the restaurant industry as a whole stayed flat.

Shake Shack's valuation is instructive for what's happening. Its stock is down 8% year to date but has lost a third of its value over the last 12 months. And though its shares trade at less than half the price they did at their 52-week high, Shake Shack's stock is still running at more than 100 times earnings.

Things aren't much different at The Habit, which has also lost half its value but still commands a price-to-earnings ratio north of 60. Considering the better-burger segment looks like it's in the midst of a retrenchment, investors ought to assume these chains have not reached the bottom.

Where might investors look for opportunity instead? Chicken. According to Nation's Restaurant News' list of fastest-growing restaurants today, four of the top 10 chains are chicken joints: Chick-fil-A, Raising Cane's, Wingstop, and Zaxby's.

The burger chains have certainly taken notice of the rising popularity of poultry, including fast-food restaurants like Burger King, which introduced a grilled chicken burger, and McDonald's, which introduced a new buttermilk-coated chicken sandwich. Even the better burger shops are adding chicken to their menu with both Shake Shack and Umami Burger now featuring chicken sandwiches.

This seems to bode well for chains that already focus solely on poultry, like Yum! Brands' KFC brand and Popeyes Louisiana Chicken. KFC had a 5% increase in systemwide sales in the first quarter absent any currency fluctuations, while Popeyes saw a better than 6% increase. And compared to their fast-casual, better-burger rivals, the chicken joints sport much more reasonable valuations at around 27 times earnings.

If the trend continues, the better burger chains will undoubtedly see those vaunted expansion plans come to a screeching halt, and investors will realize they are not the better investment.