Please ensure Javascript is enabled for purposes of website accessibility
Log In Help Join The Motley Fool
Free Article Join Over 1 Million Premium Members And Get More In-Depth Stock Guidance and Research
By Sean Williams – Jul 11, 2016 at 11:36AM

Sometimes more is less, as Ziopharm shareholders may soon find out. 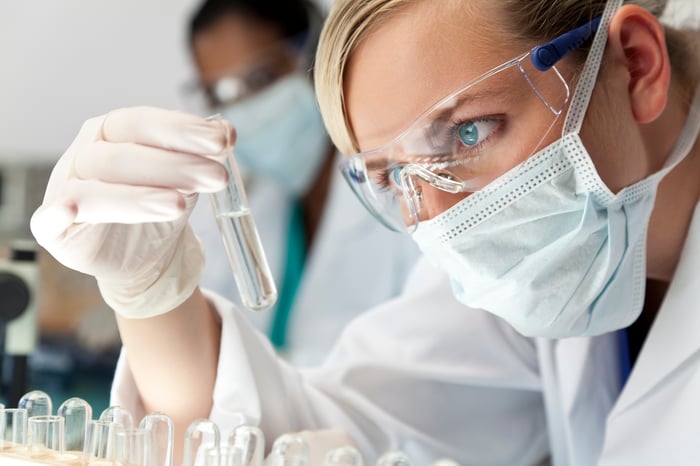 What: Shares of Ziopharm Oncology (TCRT -22.77%), a clinical-stage drug developer focused on researching first-in-class drugs to treat cancer, plummeted 30% in June, based on data from S&P Global Market Intelligence. While weak market sentiment from Brexit likely played a role in worsening investor confidence in Ziopharm, an end-of-month press release may have done far more damage.

So what: On June 30, Ziopharm and development partner Intrexon (PGEN -2.26%) amended their collaboration agreement regarding Ad-RTS-IL-12, a CAR-T-based cancer drug currently being examined by the duo.

Before the amendment, the collaboration was structured as a 50-50 partnership. In other words, the duo would share half the operating revenue and profits should Ad-RTS-IL-12 make it to pharmacy shelves. Under the new terms of the agreement, Intrexon has agreed to drop its portion of profit- and revenue-sharing down to just 20%. In return, Intrexon receives preferred shares in Ziopharm Oncology stock that equate to an initial value of $120 million. Furthermore, these shares yield 1% per month, which is payable in more preferred shares of Ziopharm Oncology stock. This is a fancy way of saying that Ziopharm will be diluting its existing shareholders each and every month.

What's more, as stated in the press release, "Upon the first approval of a product in the United States or upon certain fundamental transactions, such as a change of control of ZIOPHARM, the preferred shares issued to Intrexon will be converted into ZIOPHARM common stock equal to the aggregate stated value divided by the volume weighted average closing price of ZIOPHARM's common stock over the 20 trading days ending on the date that the product approval is announced or such transaction occurs."

Now what: For Intrexon, which brings its RheoSwitch gene control technology to the table in its collaboration with Ziopharm, the deal makes complete sense. Ad-RTS-IL-12 is still very early in its clinical development, and cancer drugs tend to have a high trial failure rate. In effect, it swapped out what is a slim chance at 50% of the profits of a blockbuster drug for 20% and $120 million worth of free Ziopharm Oncology stock.

Ziopharm isn't so lucky. It's essentially bet the house on Ad-RTS-IL-12, and if its CAR-T program doesn't absolutely blow the socks off Wall Street and researchers in midstage studies, it could get creamed, to put it mildly. Even with a veritable army of preclinical work ongoing in myeloid malignancies and graft-versus-host-disease, there just may not be enough in the pipeline to support the dilution Ziopharm could face if its leading drug candidate fails to impress.

With that said, my suggestion is to keep your distance from Ziopharm until we have a better sense for how Ad-RTS-IL-12 performed in its midstage breast cancer study. The results from a larger patient pool should give us some indication of whether Ziopharm's big risk will pay off.

Why Alaunos Therapeutics Stock Is Up Yet Again Today
351%