According to the most recently available public data, nearly 54% of offshore driller Atwood Oceanic's (NYSE:ATW) public float is sold short. That number is eye-popping, to say the least, and it means that traders are betting big that the company's stock will sink. However, the gamble makes sense given the current outlook for Atwood's earnings and the offshore drilling market.

For the most part, Atwood Oceanics has held up amid one of the deepest downturns to hit the energy sector in years. Last quarter, for example, the company was able to keep its earnings flat compared to the year-ago quarter despite a 15.4% slump in revenue from idled vessels. The reason earnings have held up so far is due to the company's strong contract backlog as well as its ability to reduce costs and its decision to buy back some debt at a discount. Unfortunately, the bulk of the contracts that have supported its earnings are set to expire over the next year: 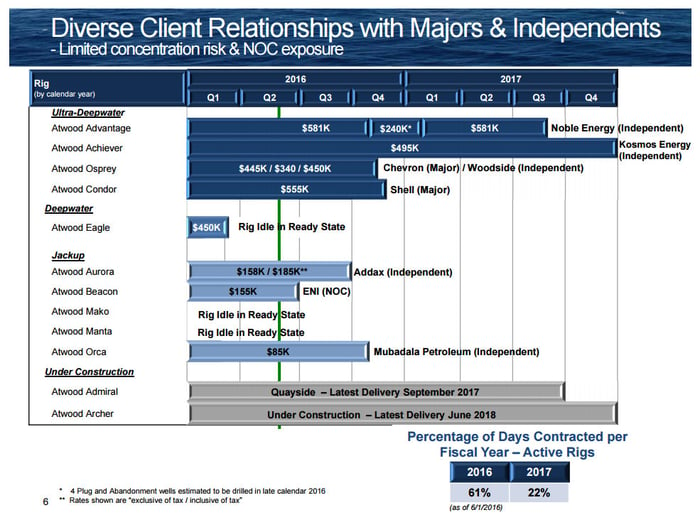 As that slide notes, three of the company's rigs have already been idled, and could be joined by five more by the end of this year. Should those additional rigs be idled, the company will not only cease earning revenue from the vessels but will have to pay fees to idle the rigs. This scenario suggests that the company's earnings could sink deeply over the next year, which is an outcome short-sellers are betting will come to fruition.

The market is awful, and the outlook is bleak

While the company is working to address the problem by seeking out new contracts for its rigs, that is very tough to do in the current environment. There just isn't enough work to go around, which is forcing drillers to offer rock bottom dayrates just to keep rigs working. Transocean (NYSE:RIG), for example, recently won a 730-day contract for a drilling project off India's coast. However, it only offered a $127,000 dayrate, which was well below the $175,000 dayrate analysts expected this rig could fetch.

Another concerning trend is that many drillers are offering blend-and-extend contracts, which lower the dayrate of the entire contract term in exchange for an extension in the contract's length. For example, Seadrill (NYSE:SDRL) was awarded an 18-month extension for one of its rigs in exchange for lowering the dayrate from $497,000 to $300,000 over the remaining life of the contract. In doing so, Seadrill will collect the same total revenue, but over a longer period.

Atwood Oceanics is pursuing similar deals. On last quarter's conference call, CEO Robert Saltiel said that its marketing team is exploring potential opportunities for most of its active rigs. However, he noted that "most of these are blend-and-extend deals with existing clients for program extensions." Such contracts would, in essence, push the company's earnings out, not deliver incremental earnings.

That said, the reason drillers are agreeing to these contracts is that the outlook for the industry is pretty bleak. There is such an overhang of idled rigs that even when oil prices recover it could take 12 to 18 months to put all the rigs back to work. Seadrill CEO Per Wullf put the industry's sentiment into perspective when he said that "we're likely to be at the end of 2017 before this starts being fun again." It is a viewpoint that suggests Atwood has some rough seas to navigate.

Short-sellers can see that Atwood Oceanics has a difficult stretch ahead of it. The company could see a significant drop in earnings, which could take its stock price down with it. It is a scenario that short-sellers believe will turn their big gamble into a tidy profit.