The airline's revenue per available seat mile has been plunging at a double-digit rate since early 2015. But it could be nearing a turning point.

It's been two years since ultra-low-cost carrier (ULCC) Spirit Airlines (SAVE -1.31%) generated any unit revenue growth. Since then, Spirit Airlines has posted some of the worst revenue per available seat mile (RASM) declines in the airline industry.

As a result, many investors fear that it will be a long time before Spirit Airlines returns to unit revenue growth. Indeed, while Spirit Airlines stock is up about 15% year to date, that's only after the stock lost more than half of its value between late 2014 and the end of 2015. 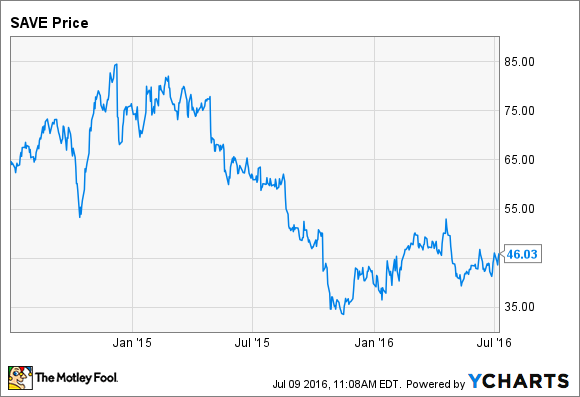 However, unit revenue trends can turn on a dime for ULCCs, as Mexican budget carrier Volaris (VLRS -2.43%) has shown in recent years. Thus, Spirit Airlines' RASM could recover just as suddenly as it plunged in late 2014 and 2015.

The table above shows that as Spirit's growth rate ramped up from 14.7% in Q3 2014 to 34.1% by Q3 2015, its unit revenue declines accelerated from 0.8% to a dreadful 17.5% drop last summer. Since then, Spirit's growth rate has started to moderate, leading to smaller (though still significant) RASM declines in recent quarters.

How quickly can revenue recover?

A key question for investors is whether Spirit Airlines will be able to stem its RASM erosion soon. Oil prices have stabilized in the past few months, so steep unit revenue declines would cause severe margin compression going forward. Fortunately, Spirit's sharp RASM declines don't mean that it is in worse shape than other airlines or that it is years away from returning to unit revenue growth.

For example, Volaris experienced a deep unit revenue slump soon after going public in late 2013. Volaris' revenue per available seat mile decreased 4.6% year over year in Q3 2013, and the declines accelerated thereafter, culminating in an 18.2% year-over-year RASM drop in Q1 2014.

Yet by the third quarter of that year, Volaris had returned to (modest) unit revenue growth, with RASM up 0.7% year over year. Moreover, Volaris posted a 22.4% jump in RASM in Q1 2015, completely reversing the decline from a year before!

The lesson here is that because ULCCs charge such low fares, their unit revenue results can be quite volatile. In Q1 2016, Spirit Airlines' average one-way fare was less than $55. Including other charges and fees, its average revenue per passenger flight segment was roughly $108. Relatively modest $10 to $20 fluctuations in fare levels thus have a huge impact on RASM.

For Q2 2016, Spirit Airlines has projected that it will produce a RASM result in line with the 13.8% decline it reported in Q1. However, in each of the previous two quarters, Spirit beat its original RASM guidance by a comfortable margin. If the company's April guidance was equally conservative, it's likely that RASM fell by only 11% to 12% year over year last quarter.

Spirit's results should improve further in the second half of the year, particularly because a sharp negative shift in the fare environment hurt the company beginning last June.

Additionally, Spirit's growth rate is starting to moderate. Based on Spirit Airlines' current fleet plan, it will increase its fleet size by just one airplane this quarter, bringing its growth rate well below 20% by Q4, compared to its 30% growth during 2015.

In fact, after starting a batch of new routes in April, Spirit isn't likely to begin any more new routes until late September or October at the earliest. (So far, it hasn't announced any new service for the fall.) Since new routes take several months to ramp up, this slowdown in expansion will help Spirit post better RASM results this summer and especially by the fall.

Spirit Airlines may still be at the bottom of the airline industry in terms of RASM performance. But Volaris showed a couple of years ago just how quickly ULCCs can go from worst to first. Unit revenue could recover at Spirit Airlines sooner than you think.